Diverse Dozen Down for Travers: Tacitus the morning-line favorite at 5-2

A field of 12 has been entered for Saturday’s $1.25 million Runhappy Travers Stakes (G1) at Saratoga Race Course, with Belmont Stakes (G1) and Jim Dandy (G2) runner-up Tacitus the 5-2 morning-line favorite.

The post-position draw was held at the iconic Adelphi Hotel in downtown Saratoga Springs, New York, with many of the horse owners, trainers and jockeys on hand for the Tuesday evening event.

“We’re looking for him to have a day in the sun, and we hope it’s in the Travers,’’ said Tacitus’ Hall of Famer trainer Bill Mott, looking for his first Travers victory. 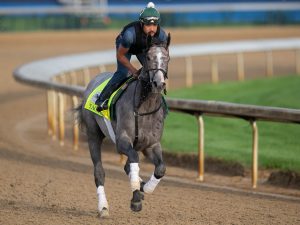 Tacitus has been a hard-luck 3-year-old this season after winning the Wood Memorial (G2) at Aqueduct in April. The son of top sire Tapit was elevated to third from fourth in the Kentucky Derby (G1), and was beaten a length by long shot Sir Winston in the Belmont. In the Jim Dandy, he stumbled badly at the start but wound up second, just three-quarters of a length behind Tax.

Tax, meanwhile, has been listed as one of three 6-1 third choices on the morning line, with Dwyer (G3) winner Code of Honor the second choice at 4-1.

Hall of Fame trainer Shug McGaughey, who trains Code of Honor, is looking for this fourth win in the Travers, and first since he won in 1998 with Coronado’s Quest.

“Since he’s been up here, he’s done everything I’ve asked him for,’’ said McGaughey. “He’s enjoying his time here and we’ll see what happens on Saturday.”

Danny Gargan threw down the gauntlet at the draw, proclaiming that Tax (who drew the outside No. 12 post) will gun for the lead under Irad Ortiz, Jr., and welcomed all comers to run with his horse.

The field does not include any of the Triple Crown race winners (Country House, War of Will and Sir Winston), or Maximum Security (the DQ’d first-place finisher in the Derby).

The field, from the rail out with post position, horse, trainer, jockey, and odds: