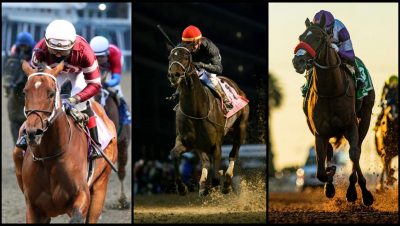 Saturday’s $400,000 Risen Star Stakes (G2), presented by Lamarque Ford, at the Fair Grounds drew a talent-packed field of 10, which isn’t much of a surprise since it’s the first North American Kentucky Derby (G1) prep race this year offering 50 points to the winner, as well as 20, 10 and five for second through fourth.

The race is named for the Louisiana-based champion who went on to win the 1988 Preakness (G1) and Belmont Stakes (G1) and is the required local prep to make the Louisiana Derby (G2) in five weeks. This year the race distance will be nine furlongs, a sixteenth of a mile further for the fourth year after having previously been run at 1 1/16 miles.

Once again, the Risen Star races are sponsored by Lamarque Ford-Lincoln — owner Ronnie Lamarque was also Risen Star’s co-owner. A native New Orleanian, Lamarque had a ton of fun and earned national recognition owning horses back in the 1980s and early 1990s and even wrote songs about a few of them.

In 1987, Lamarque and trainer Louis Roussel plunked down $300,000 for a son of Secretariat at the Fasig-Tipton 2-year-olds in training sale in Florida and the colt was named Risen Star by using symbols of Roussel’s deep religious faith – the resurrection of Jesus Christ and the Star of Bethlehem. At the time, the conditioner was part owner of the Fair Grounds, so the colt making his debut in the Pelican State was a foregone conclusion and his career came at a time when Louisiana wasn’t as popular a winter destination for Northerners looking for warm winter weather as it is now; most went to South Florida to escape the snow.

Risen Star, who made his first two starts at Louisiana Downs as a 2-year-old for trainer Rene Gebbia before shipping to Roussel at the Fair Grounds, stayed in Louisiana until his last Derby prep — which was a win in the Lexington Stakes at Keeneland – and it may be fair to say that Risen Star helped put the Louisiana route to the Kentucky Derby on the map.

He was third behind Winning Colors and Forty Niner in the Derby and then won the Preakness by 1 ½ lengths. In the three weeks between the Preakness and Belmont, Risen Star slightly injured his right front suspensory, but he ran in the final leg of the Triple Crown and won by a whopping 14 ¾ lengths in 2:26 2/5. Due to his performances in the three Triple Crown races, he earned the most points and collected a $1 million bonus for his connections. 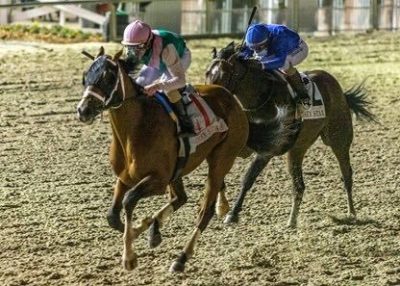 Risen Star only raced 11 times but put together an awesome championship season within those races. His last race was the Belmont and despite several attempts to bring him back off his injury, he was retired to Walmac Farm in Lexington later that year where he lived until his death from colic in 1998. He produced a few stakes winners, but like his sire he was never much of a sire himself, his most notable offspring being millionaire Star Standard.

Lamarque has owned other good horses and remains an active owner today but has never had one as successful as Risen Star. Always an amateur singer, he most recently earned some notoriety with his singing appearance on America’s Got Talent. He didn’t make it far, but he reminded racing fans of the good natured and fun guy we all got to know in the days of Risen Star.

So, it was more than fitting that the Fair Grounds named a race for one of its most notable and popular runners who was owned and trained by some of the areas most notable and well-liked people. The race was once known as the Louisiana Derby Trial Stakes and many good horses have used it to go on to exceptional careers, including 2017 Horse of the Year Gun Runner. Other standouts to have won the Risen Star include Mucho Macho Man, Lawyer Ron, Badge of Silver, Dollar Bill, Exchange Rate and War of Will.

A year ago, Juddmonte Farm’s Mandaloun earned the Risen Star victory, which is notable in that the colt went on to Kentucky and crossed the Kentucky Derby wire in second place. If the winner, Medina Spirit, is disqualified for a post-race positive on an overage of the therapeutic medication betamethasone, Mandaloun will be declared the winner, which would make him the first Risen Star–Kentucky Derby winner.

The field by post position (with riders, trainers, pedigree)

Tourist-I Think So, by Proud Citizen

Not This Time-Silent Candy, by Candy Ride

Upstart-Memories Prevail, by Creative Cause