A Record-Setting Day For Steve Asmussen: Win No. 9,446

The improbable journey began long ago in Laredo, a dusty Texas town on the Mexican border. For the Asmussen clan it’s always been about grinding relentlessly, rising before the sun to take care of the animals. Showing up every day is half the battle, and when you love it, it’s not a job.

“Growing up in a barn” gave Steve Asmussen a work ethic and a knack with thoroughbreds, and he gives full credit to his parents, Keith and Marilyn, and his only sibling, Cash. Keith still breaks many of Steve’s horses at El Primero Training Center in Laredo. Keith founded it in 1961, four years before Steve was born. 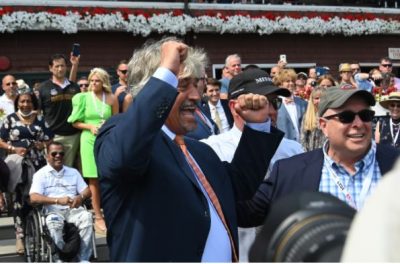 Six decades later, Steve Asmussen owns the record for wins by a North American trainer. The long-awaited moment came Saturday (Aug. 7) in the fifth race at Saratoga, where first-time starter Stellar Tap gave him his 9,446th victory, breaking a tie with the late Dale Baird.

Ricardo Santana, Jr., Asmussen’s go-to rider for many years, drew away in mid-stretch on the gray son of Tapit to win easily. The colt was broken at El Primero, as were hundreds of his winners.

“I think I’m just very fortunate to be the perfect storm. I’m the younger brother of a mom and pop organization. My brother was a champion jockey in this country and in Europe. Mom trained and Dad rode, and Dad’s the best horseman I’ve ever seen. My mom’s attention to detail is impeccable. They’re 79 years old now, and they’ve dedicated their lives to horse racing.

“When you have that kind of situation in front of you, what are you scared of? How spoiled I was to grow up in that shed row. Right place, right time, right people.”

At 5, Steve was walking hots and mucking stalls. As a kid, a horse bit off part of a thumb, which didn’t scare him off. He kept working and learning. But it’s one thing to be born into an ideal scenario, and another to make the most of it. For Asmussen, it was all about hanging tough at 19 after an injury and a growth spurt to 6 feet aborted a brief, unsuccessful riding career. By the time he recovered, he was too heavy to ride.

Asmussen switched to training but in 15 starts his first year, 1986, he had only one win. Greatness as a trainer didn’t seem meant to be, either.

“This record was beyond my wildest dreams when I started training,” he told NBC’s Nick Luck. “Back then I was just hoping to win a race. Starting out in maiden claimers at Ruidoso Downs, one win wasn’t easy.”

Asmussen’s progress was slow and gradual, and it took 12 years, until 1998, before he cleared 100 victories in a season. After that came an avalanche of winners that’s never stopped. He had 233 in 2000, and he’s never totaled fewer than 241 in this century.

Finding his first “big horse” took nine years. Valid Expectations came along in 1995 and put Asmussen on the national map by sweeping seven stakes in his career. Dreams Galore gave him his first Grade 1 in the 1999 Mother Goose. Since then, he’s scored in two Breeders’ Classics, a Preakness, a Belmont, a Dubai World Cup and two Kentucky Oaks. 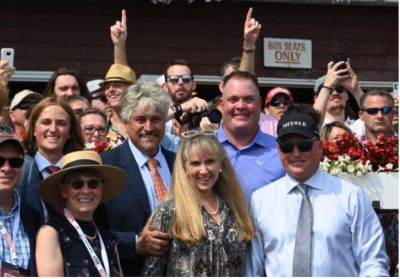 Steve always has marveled at his brother’s way with horses. “Cash never understood why other people couldn’t do what he could do,” and in 2000 he said he’s “always been Cash’s biggest fan.” Yet despite Cash’s brilliant career, somehow Steve turned out to be the more accomplished brother.

That seemed most unlikely in 1979, when 17-year-old Cash was the country’s leading apprentice and Steve was a 14-year-old junior jockey. It would have appeared impossible in 1985, when Steve stopped riding after only 63 wins in three years and Cash was on his way to becoming a five-time champion in France.

“When I rode,” Steve said, “they called me Gumby, and it wasn’t a term of affection.”

But it’s all about dedication, and no one has more of that than Asmussen.

“I think effort is the most impressive quality for equines and humans,” he said. Disappointments fuel someone “who definitely learns more from a loss than from a win.”

Looking ahead is his MO, but he’s savoring his historic achievement.

“When you’re doing this, you’re in the middle of it at all times,” he said recently. “I think getting to a significant milestone like this allows you an opportunity to look back and reflect upon the ground you have covered. I’ve thought about it for a long time. I think it’s extremely significant to end up being the winningest horse trainer.

“Well, if it didn’t matter, why do they keep counting, right?”

Asmussen will never stop counting while doing what he’s always done. He’ll keep chasing his white whale, the Derby, where his 0-for-23 schneid is an unwanted record. He wants to overtake Peruvian trainer Juan Suarez Villaroel, whom he trails by more than 300 wins for the world mark. He’ll keep going from track to track to be hands-on with his hundreds of runners.

“I will undoubtedly worry about getting the next win,” he said. “That one will be the hardest one to get.