Code of Honor comes through to take the $1.25 million Runhappy Travers 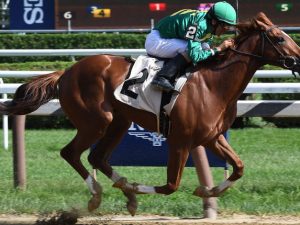 Code of Honor overtook the leaders in the stretch and pulled away for a three-length victory in the $1.25 million Runhappy Travers Stakes (G1) on a sunny summer Saturday at Saratoga Race Course.

With a crowd of 48,123 packing the Spa, Code of Honor, under Hall of Famer John Velazquez, blew past Mucho Gusto and hard-luck Tacitus to give Hall of Fame trainer Shug McGaughey his fourth Travers victory and first since 1998.

“Obviously, we’ve been looking for this kind of performance for a long time,’’ said Velazquez, who has been aboard the 3-year-old William S. Farish-owned colt for seven of his eight career starts. “He’s a late foal, not really knowing what to do (even though he’s) run some really big races. He never really put it together until today.”

Code of Honor won the Dwyer (G3) at Belmont Park on July 6 in his previous start, and did so convincingly. He was sent off as the 4-1 second choice behind Tacitus, who was fitted with blinkers for the first time, and ran closer to the leaders.

But he still finished second, just as he did in the Jim Dandy (G2) and Belmont Stakes (G1) in his two previous starts.

“I had one eye on the winner and one eye on mine,’’ said Tacitus’ Hall of Fame trainer Bill Mott. “It looked like there was a good chance we were going to outduel Mucho Gusto, but the winner, I mean he rolled by pretty fast.

He skipped the next two legs of the Triple Crown and returned by winning the one-mile Dwyer by 3 ¼ lengths.

McGaughey was unsure of the colt’s next start, but the goal is the Breeders’ Cup Classic (G1) at Santa Anita on Nov. 2.

Asked what he thought of the 3-year-old division, McGaughey said: “The way he won today, you have to put him up there with them. We’ll see what happens.”