Breeders’ Cup 2019: Baffert Brings Bevy of Blue-Chippers to BC 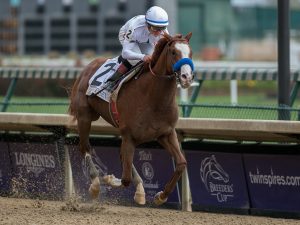 Take it from someone who’s been around the Breeders’ Cup for nearly three decades, sending out 115 runners beginning in 1991, collecting 15 victories in five different divisions, including five in the Sprint, four in the Juvenile and three in the big one, the $6 million Classic.

That would be Bob Baffert, the two-time Triple Crown winner and Hall of Famer who will add four more starters to his resume this weekend at Santa Anita.

At 66, the most recognizable face in the racing (OK, so it’s his white hair that’s recognizable), is always great for a sound bite and he has a way of putting this two-day, 14-race, $30 million extravaganza into perspective.

“At the end of the day (or days in this case), the cream always rises to the top, and that’s what the Breeders’ Cup is all about,’’ he said following Monday night’s post-position draw for all 14 races.  “It’s great racing. You have to be really good, and really good on that day.”

Baffert has a knack for placing his talented horses in winning spots, and he appears to have his quartet in top form leading up to their races. Even Santa Anita oddsmaker Jon White believes in Baffert.

McKinzie, a four-time runner-up this season to go along with victories in the Alysheba (G2) and Whitney (G1), is the 3-1 morning-line favorite for Saturday’s $6 million Classic over 10 rivals, including 3-year-old Code of Honor (Travers and Jockey Gold Cup winner), Vino Rosso (Santa Anita Gold Cup and DQ’d from first to second in the JCGC) and the mare Elate, who is 3-for-3 at the Classic 1 1/4 –mile distance.

Improbable, the beaten favorite in the Kentucky Derby (G1) and Preakness (G1), is the 3-1 second choice on the morning line in Saturday’s $1 million Dirt Mile despite just one victory in six starts this year. Omaha Beach, who made a triumphant return to the races earlier this month in the Santa Anita Sprint Championship (G1), is the 8-5 favorite in a field of 14.

Eight Rings, coming off a win in the American Pharoah (G1), is the 2-1  second choice in Friday’s $2 million Juvenile behind 8-5 favorite Dennis’ Moment in a field of nine.

Bast, coming off a pair of Grade 1 wins, including the Chandelier at Santa Anita, is the 7-2 co-second choice behind 3-1 favorite Donna Veloce in a 14-horse field for Friday’s $1 million Juvenile Fillies.

“I was happy with it. You never want to be down inside,’’ Baffert said. “This is the last thing that you don’t have any control of. It looks like all the horses drew pretty well in there. All the good horses are next to each other.”

For Improbable, though, Baffert would have preferred a post farther out, but as Dale Romans, who trains Dennis’ Moment, says: “It doesn’t matter where Baffert is. You have to always factor in the Baffert effect. They sure seem to run well in big races.”

Baffert has plenty of company when it comes to saddling top horses for the Breeders’ Cup. He may not have a Horse of the Year contender, but Hall of Famer Steve Asmussen has two, Midnight Bisou (7-for-7 in 2019) in the $2 million Distaff and Mitole (5-for-6) in the $2 million Sprint, and so does Chad Brown, Bricks and Mortar (5-for-5) in the $4 million Turf and Sistercharlie (3-for-3) in the $2 million Filly & Mare Turf.

The Classic may not produce the Horse of the Year, but it will have an impact depending on the upset factor in the earlier races. 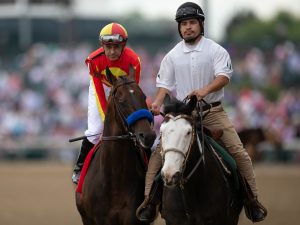 So if you want to combine favorites and long shots in this Classic, why not go for the 3M plan – McKinzie, Mongolian Groom (who recently beat McKinzie) and Math Wizard?

One of the many intriguing subplots takes place in the turf races, where American turfmeister Brown goes against Irishman Aidan O’Brien on many fronts.

Among them are the Turf and the Mile.

In the Mile, O’Brien’s two-time Group 1 winner Circus Maximus is the 3-1 favorite in a field of 14, while Brown sends out Uni (7-2), coming off a course record-setting win in the First Lady (G1) at Keeneland.

A total of 168 horses are entered for the Breeders’ Cup, including nine also-eligibles. Among them are two BC winners from last year — Sistercharlie won the Filly & Mare Turf and Stormy Liberal is a back-to-back winner of the Turf Sprint (G1)

While the races should be thrilling, there’s also a hold-your-breath feel surrounding the event. Six horses have died at Santa Anita over the past six weeks, which followed 30 horse fatalities during the track’s winter-spring meet. Track owners the Stronach Group have implemented several new safety measures, but with the races on national television, any issue could have serious ramifications.

When asked about the fatalities, Baffert replied, “I hate to really say anything. I don’t want to jinx myself.”