Midnight Bisou is all set to take on a global field in her quest for a perfect season in the $2 million Breeders’ Cup Distaff on Saturday at Santa Anita Park.

Among her challengers are Blue Prize from Argentina, a 6-year-old mare who defeated BC Classic entrant Elate in the Spinster (G1), La Force from Germany and Wow Cat from Chile.

Paradise Woods, winner of the Zenyatta (G1) in her most recent race, is the 5-1 second choice for California-based trainer John Shirreffs.

No matter. This is Midnight Bisou’s chance to claim Horse of the Year honors with a victory.

“She’s just starting to blossom and she’s only four,’’ marveled Hall of Famer Mike Smith, who will be aboard Midnight Bisou once again. 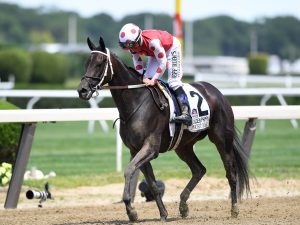 This year, Midnight Bisou has three Grade 1 wins at three different tracks – the Apple Blossom at Oaklawn, the Ogden Phipps at Belmont and the Personal Ensign at Saratoga.

In her most recent start, the daughter of Midnight Lute won the Beldame (G2) by 3 ¼ lengths with John Velazquez subbing for Smith, who has ridden the filly in 14 of her 18 races.

The Distaff is the 10th race on Saturday’s card, two races before the Classic.