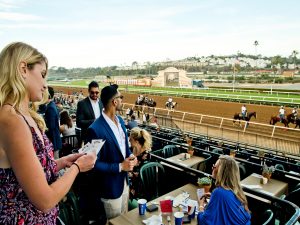 Thoroughbred racing returns to “where the turf meets the surf” on Wednesday for the 80th season at the Del Mar Thoroughbred Club in Del Mar, California. A 10-race card, topped by the traditional stakes opener – the Oceanside Stakes – is on offer for the first day of the season and will be sponsored for the first time this year by sprint champion Runhappy, whose first crop are yearlings this year.

The 36-day Del Mar meeting, which runs through Labor Day, Sept. 3, will offer 40 stakes worth more than $7.4 million, 19 of which will be run over the Jimmy Durante Turf Course and the remaining 21 on the dirt main track. Of the 40, 22 are graded, including six Grade 1s.

Racing will be conducted on a Wednesday-through-Sunday schedule with the addition of Labor Day Monday. First post daily will be 2:00 p.m. PT, with the exceptions of “Four o’ clock Fridays,” when the first race leaves the gate at 4:00 p.m.

The shift south should bring a respite from the unrelenting heat – both temperature-wise and scrutiny-wise – at Santa Anita Park.

Del Mar will maintain a series of initiatives enacted this spring at Santa Anita and continued to the brief Los Alamitos meeting to enhance safety and procedures for all horses and their riders who train, work and race over the track. Some of the new safety protocols include an entry review panel; therapeutic medication and race day medication clarifications, including the reduction and elimination of several; increased out-of-competition testing; and no whips for exercise riders or jockeys in the mornings

Also, the conditions of all of the approximately 1,800 horses stabled at Del Mar will be analyzed and reviewed by Del Mar’s racing department for specific issues, such as long breaks in racing or between workouts, and will be flagged for additional scrutiny.

The most recent Jockey Club Equine Injury Database ranked Del Mar as among the safest major racetracks in the country. With the national average rate of 1.68 fatal injuries for every 1,000 starters, Del Mar reported 0.79 fatal injuries per 1,000 starts in 2018. DMTC remains fully accredited by the National Thoroughbred Racing Association’s Safety and Integrity Alliance for its upcoming season, having passed a complete review of equine and track safety protocols, injury reporting and prevention, medication testing, jockey health and safety best practices, wagering integrity and equine aftercare policies in October of 2017.

A Betting Option for Everyone

Virtually mirroring the 2018 season, Del Mar’s 2019 betting menu will offer racing fans a multitude of ways to wager on the 36 racing cards.

In addition to the traditional win, place and show wagers, standard exactas, trifectas and daily doubles, three successful wagers inaugurated a year ago are back — the 50-cent early Pick Four starting on Race 2; a 50-cent late Pick Five offered on the last five races daily; and $2 Win, Place, Show Parlays available for a minimum of two races and a maximum of six, which offers the standard single-bet win/place/show takeout of 15.43 percent instead of a multi-bet takeout above 20 percent.

The wagering menu again offers its popular Pick Four on the last four races on the day’s card along with a late Pick Five.  Additionally Del Mar will continue the $2 Pick Six on all racing days, along with the “Single Ticket Jackpot.”. Under “Jackpot” rules, a separate pool accumulates alongside the regular one if nobody hits the bet as a lone ticket holder, which allows for a large separate pool to grow even in the case of a “hit’ on the Pick Six by two or more players.

Del Mar has also scheduled two “mandatory payouts” on the “Jackpot” pool: TVG Pacific Classic Day, Saturday, Aug. 17, and closing day, Monday, Sept. 3. A Pick Six winner on either of those dates would share not only in the regular pool, but also the full “Jackpot” pool. Additionally, consolation winners on those days also would share in the “Jackpot” payout.

The array of Del Mar bets:

$2 Rolling Doubles (all except last)

$2 Win-Place-Show Parlay (all races but last)

Del Mar’s successful “Ship and Win” program is back for another year and offers out-of-state horses and horsemen a chance to race at Del Mar. Horses imported from outside California this year will receive $2,500 to run, and in their first start the purse will be worth an additional 40 percent more for all runners.

An eligible horse must have made his or her last start outside California and cannot have raced in the state within the past 12 months and first-time starters are not eligible. All stakes runners are eligible to receive the $2,500 starter fee, but no stakes runners – including overnight stakes – are eligible for the 40 percent first-race purse bonus.

Since the program was first installed in 2011, Del Mar has drawn more than 1,100 runners who made more than 1,750 starts locally and 3,700 starts at other state tracks, including Santa Anita, Los Alamitos and Golden Gate Fields. The program has also helped Del Mar maintain one of the highest field-size averages in the country — 8.7 runner per race during Del Mar’s summer meeting a year ago.