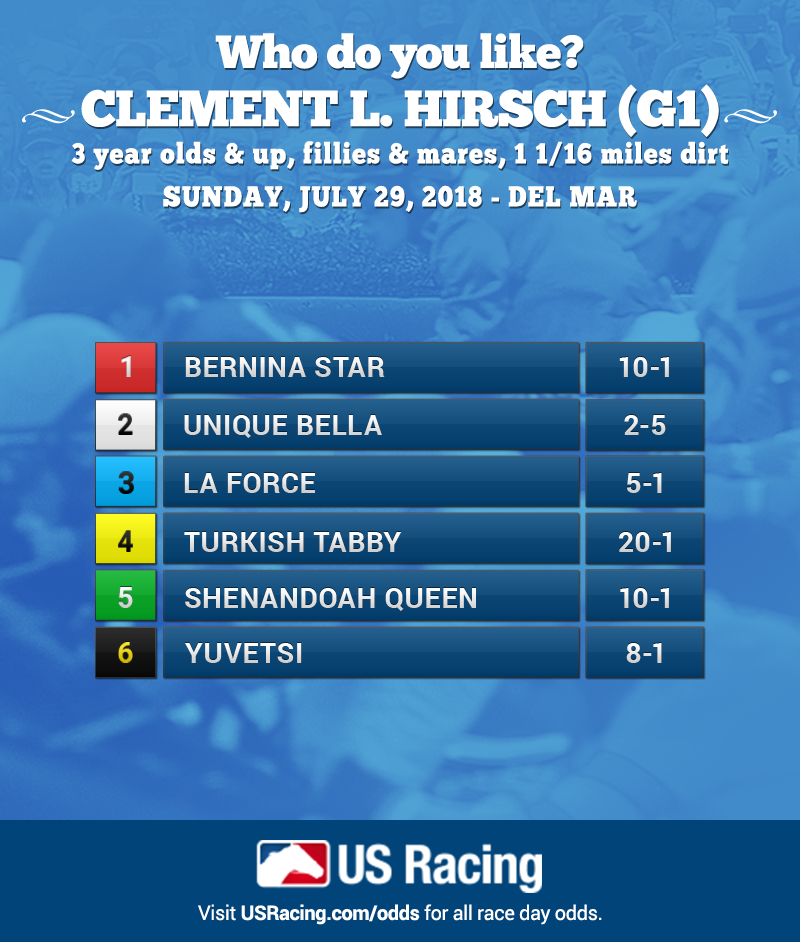 A compact but talented field of six will square off in Sunday’s $300,000 Clement L. Hirsch Stakes (GI) at Del Mar, the 2018 meeting’s second Breeders’ Cup Championship “Win and You’re In” event — this one guaranteeing a spot in the starting gate for the Nov. 3 $2 million Longines Breeders’ Cup Distaff (GI) at Churchill Downs.

The Del Mar weather continues to be beautiful, but the humidity is expected to drop this weekend with the afternoon high is expected to reach the low-80s, guaranteeing another day with a fast track. The Hirsch has been carded as the afternoon’s fifth race with a post time of 4:03 p.m. EST.

The Clement L. Hirsch was once known as the Chula Vista Handicap and was renamed in 2000 to honor the man who created the Oak Tree Racing Association and who passed away that same year. A superstar list of distaffers have taken home the trophy over the years, including champions Princess Rooney, Bayakoa, Paseana, Sharp Cat, Azeri (twice) and Zenyatta (three times). All but Sharp Cat are in the Hall of Fame.

Champion Stellar Wind won this race a year ago for the second time.

This year it’s champion Unique Bella who is the standout of the bunch coming off a win in the Beholder Mile (GI) last out on June 2. The talented daughter of Tapit ran the worst race of her career over this track when seventh in the Breeders’ Cup Filly and Mare Sprint (GI) last November, but did break her maiden by 10 lengths here 18 months ago. This two-time Grade 1 winner has been working well since her last, including a bullet in 1:11 4/5 here eight days ago, has huge speed figures and some tactical ability to give her an edge.

“She’s very nice to work with around the barn and she does her job all businesslike on the racetrack,” Hall of Fame trainer Jerry Hollendorfer said about the big gray Don Alberto-owned filly. “She’s been that way since day one.”

“She’s a little claustrophobic in the stall, but outside she’s a lot better,” Hollendorfer assistant Dan Ward added. “At Santa Anita we put a window to the next stall so she could see the other horses. [At Del Mar] we can put up outside pens and she’s really comfortable in hers and doesn’t show any nerves at all.”

Hall of Famer Mike Smith, who is the only jockey to have ever ridden the Hollendorfer stable star, will be back for the race and the pair will break from post position two.

Click HERE for the latest odds on the Clement L. Hirsch

In her last three races German-bred La Force has had the unfortunate situation of facing both Unique Bella and Fault. Unique Bella returns as her big competition and, though it’s not likely she’ll get past her here, her figures indicate she’s at least second-best and will be running late down the lane under Drayden Van Dyke.

Bernina Star, an expensive daughter of Harlan’s Holiday, has had a decent career in non-graded stakes and, though she is Grade 3-placed, she has struggled against top-tier fillies. This may be a distance challenge for her as well.

John Sadler sends out Yuvetsi and Shenandoah Queen, the former coming off a victory at today’s distance in the Santa Lucia Stakes at Santa Anita in June. It was a nice effort after finishing third in the Desert Stormer (GIII) and this distance is certainly more suited to the nice well-bred daughter of Bodemeister.

Shenandoah Queen won the Tranquility Lake her last year at a mile and was second in the Adoration Stakes (GIII) at this distance in early May. If we toss out her last — an unsuccessful turf experiment — she’s a logical bet to pick up a piece here.

Turkish Tabby is the “other Hollendorfer” who hasn’t competed in a race in a very long time (18 months). This is a very ambitious spot for her, though she may have just been entered to help field size.