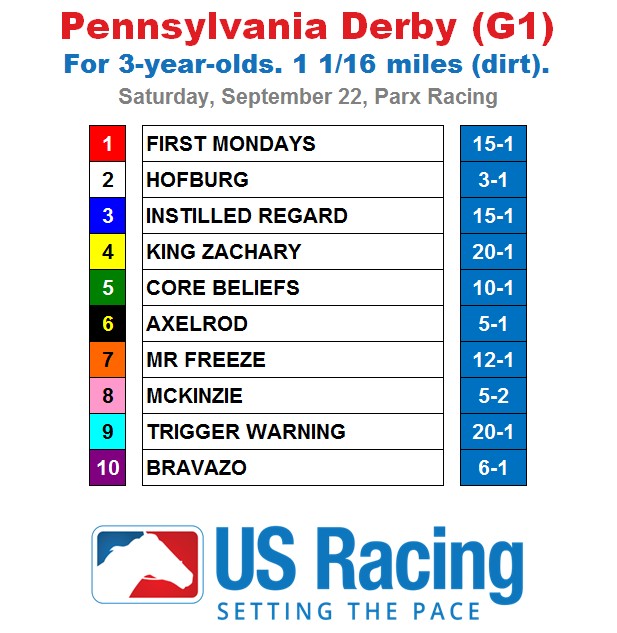 The Pennsylvania Derby (GI), held every September at Parx Racing, is for many a last-ditch effort to get a rich Derby win for the best of the year’s sophomore crop. With Triple Crown winner Justify safely tucked away at Ashford Stud in Kentucky, ready to embark on his next career as a stallion, the title of best of the division remains firmly up in the air, with the connections of ten runners hopeful to pull down the title. Or at least share it with recent runaway Travers Stakes (GI) winner Catholic Boy.

Hall of Famers Bob Baffert and Mike Smith return from the win a year ago with the comebacking Grade 1 winner McKinzie, who hasn’t started since a win and subsequent disqualification in the March 10 San Felipe Stakes (GII) at Santa Anita. McKinzie suffered a hock injury (he reportedly has a bad habit of getting “cast” or stuck when laying down in his stall) that kept him out of any sort of training for months and now, back with steady training and workouts since the first of August, he takes on perhaps the toughest challenge of his brief, four-race career. Though the Watson, Weitman and Pegram colorbearer has never contested this distance, the son of Street Sense and the Petionville mare Runway Model is more than bred for it and, at one point, before Justify came along, he was considered his trainer’s best chance for a Kentucky Derby win.

If he’s fit, his numbers show he’s certainly worth the 5-2 morning line odds that oddsmaker John DaSilva gave him and should go off even lower. And he’s certainly capable of setting the pace or sitting off it, since it’s unclear who will actually want the lead from the break.

It’s probably safe to say that Hofburg hasn’t turned out to be the horse many expected following his second-place finish in the Florida Derby (GI) in the spring. He went from the “wise guy” Kentucky Derby (GI) runner to the solidly defeated second choice in the Belmont Stakes (GI), yet is still considered to be one of the better runners in his crop. Trainer Bill Mott gave the Juddmonte homebred son of Tapit another long break from racing following the final jewel in the Triple Crown and Hofburg returned with a stunning win in the restricted Curlin Stakes at Saratoga in late July over a sloppy track.

Ever the cautious conditioner, Mott again planned his next race to be nearly two months after his last and here we are. He has shown ability to put up big numbers, especially pace numbers, and if he gets an honest pace to run at under Irad Ortiz, he’ll be tough if the favorite falters.

Click HERE for the latest odds on the Pennsylvania Derby

OXO Equine’s Instilled Regard makes his first start in more than four months since his decent – and somewhat surprising – fourth-place showing at 85-1 in the Kentucky Derby and his first for trainer Chad Brown. He’s a good, talented and useful horse who can make a statement by picking up a larger share of the pot. Has some tactical ability and jockey Jose Ortiz can either place him close to the pace if it’s slower or well back if it happens to be more lively. And he’ll be good odds, probably, in his first start off the layoff.

Axelrod brings a two-race win streak, including the Indiana Derby (GIII) and Smarty Jones Stakes (GIII) into this race and looks a tough competitor. He’s certainly improved with each start and has risen to each challenge trainer Mike McCarthy has thrown at him and fits well with this bunch. He’s got good figures and a pedigree to suggest he’ll like the nine furlongs for the first time, and it certainly helps to have Joe Bravo back aboard, the winningest jockey in the race looking for his fourth victory. He’ll probably get a similar mid-pack trip as his last two and a repeat gives him a solid shot.

West Virginia Derby (GIII) winner Mr. Freeze is the likely pacesetter and if he repeats his last, which earned him a huge field-high Brisnet speed figure of 107, he surely has a solid chance to win. He’s been working great for Dale Romans at Churchill Downs and his consistency — he’s never finished worse than second in two starts, is absolutely a plus. Regular jockey Robby Albarado will be back aboard.

Calumet Farm’s Bravazo hasn’t won a race in seven months since the Risen Star Stakes (GII) at Fair Grounds, but after a decent sixth-place finish in the Kentucky Derby, he was second to Justify in the Preakness and a solid third in the Travers last out. His ability to regularly earn triple-digit speed figures is a plus, as is his overall consistency. And nobody gets 3-year-old colts more ready than Hall of Fame trainer D. Wayne Lukas. Regular rider Luis Saez will be back in the saddle.

Matt Winn Stakes (GIII) winner King Zachary earned a pair of fourth-place finishes in the Indiana Derby (GIII) and Travers Stakes, though he was fairly solidly beaten. Can’t blame the connections (owner Tom Conway and trainer Dale Romans) for giving him a shot here and it’s a good bet he’ll be rolling late down the lane under Corey Lanerie.

Ohio Derby (GIII) winner Core Beliefs is back after a troubled fourth-place finish in the July 27 Haskell Invitiational (GI). He’s certainly better than that performance, judging by his figures, and he’s been working great at Santa Anita, including a bullet six-furlong drill last week. Joe Talamo returns.

Trigger Warning was no match for the top rivals in the Travers last out, but his placings in the lesser Derbies puts him in the thick of things for a placing here. His big question mark is that he appears to be more of a sprinter against some solid, confirmed router types.

Local runner First Mondays is coming off a third behind Axelrod in the Smarty Jones Stakes (GIII). Lightly raced with just three starts to his credit, this John Servis-trained son of Curlin has room to improve but was tossed into a tough spot against this level of competition.