Eddie Mac’s Book: Onward to the Fair Grounds for a Pick 3 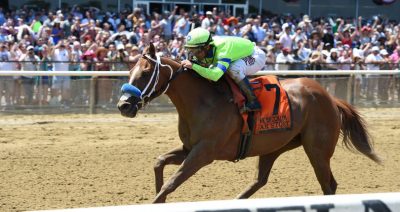 I couldn’t have been in better shape. I’d hit the first two legs of Gulfstream Park’s pick 5 and was alive to five horses in the next race. After just connecting for an $11 winner and a $56 exacta, this notorious “worst case scenario” guy was fantasizing about a big score.

I should have known better.

I’d considered using Instilled Regard in the third leg, the Fort Lauderdale Handicap (G2), but only because he’s trained by turf wizard Chad Brown. I talked myself out of it, considering he was 0-for-3 lifetime on the grass and 0-for-8 overall since February 2018.

I preferred Brown’s other runner, Flavius, and besides him I had heavy favorite Channel Cat and three others on my $30 ticket. You can’t bet ‘em all, so I disregarded Instilled Regard and seethed as he rallied to win by a half-length as I finished second, third and fourth. Five minutes before post time, when Instilled Regard was 7-1, I thought about putting $10 to win on him as a saver. I didn’t, yet when I saw he’d been bet down hard late and paid only $8.60, it minimized my self-loathing.

As it turned out, Instilled Regard didn’t keep me from hitting the pick 5, because 12-1 War Story, whom I didn’t like, won the next leg. One of my four selections in the finale took a photo finish, which was like making a 3-pointer at the buzzer while trailing by 15 in garbage time.

It wasn’t so much throwing away 30 bucks, a mere flesh wound for a battle-hardened pari-mutuel warrior. It was not having the chance to advance to the next-to-last leg when I had five possibilities. The moral of this sad story: Not winning feels a lot worse than losing.

Fair Grounds’ turf generally favors closers. Unfortunately, there’s no consistently powerful finisher in this speed-laden field, which complicates matters. Dream Passage (No. 8) has the best overall record and should be favored. Don’t hold her 0-for-2 record over the course against her because those races were at 5½ furlongs, clearly not her distance. Others on the ticket will be Notapradaprice (5), La Signare (4), Smart Emma (2) and long shot English Soul (6).

Another tricky race, because of the six young colts only Axiomo looks overmatched. Recent maiden breakers Shashashakemeup (1) and Gold Street (2) have the most speed, and Ryan’s Cat (3), working bullets after a 14-length runaway at minor-league Mahoning Valley, could press them. If a duel develops, price horses Amongst (4) and Self Taught (5) have shown the ability to close and should benefit. I’ll use all five and hope for a double-digit winner.

In a field filled with speed, the best closer is Dot Matrix, who has two wins and a second in three tries on Fair Grounds’ grass for trainer Brad Cox. Too bad he’s stuck out in post 13. Isn’t handicapping complicated? Dot Matrix’s best two races this year, both against fellow New York-breds, weren’t really that good. He edged Voodoo Song (0-for-5 in 2019) and ran a close second to Offering Plan (1-for-6). Let’s try to beat Dot Matrix. I’ll use trainer Mike Maker’s pair of Space Mountain (3) and Parlor (5) along with stalker Renaissance Frolic (2), a winner of three in a row whose tactical speed could create a nice inside trip.