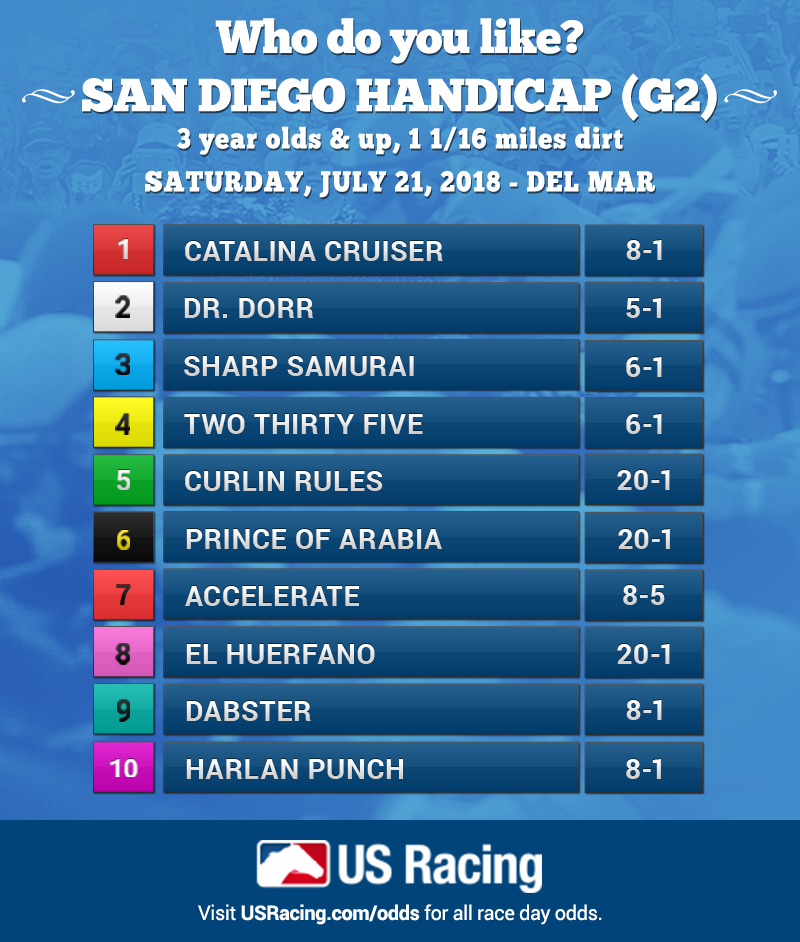 Nine will go to the gate for Saturday’s $200,000 San Diego Handicap (GII), the traditional prep for the Pacific Classic in a month’s time and a rare event for the older male runner division in that horse are assigned varying weights. While this year’s field doesn’t have the hype of North America’s richest racehorse making an appearance like last year’s did, a solid field of older horses will head to the gate in the 1 1/16-mile feature over Del Mar’s main track.

The weather in Solana Beach is expected to be typically beautiful on Saturday, with afternoon highs in the upper 70s and with a sea breeze, as always, to keep conditions cool. The intense humidity is back, however, so it will be warm and muggy all day. Expect a fast main track for this main event, which has been carded as the seventh race of the day. Post time has been set for 5:00 p.m. PT.

Long before California-bred fan favorite Best Pal won the inaugural Pacific Classic 27 years ago and that race became the premier event for handicap stars on the California summer calendar, the San Diego Handicap was consistently featuring some of the West Coast’s best handicap horses. Named for California’s beautiful coastal city, the San Diego was first run during Del Mar’s debut season in 1937 and has grown in prominence and stature on the national racing scene in recent years.

The great California-bred gelding Native Diver was the first to put the race on the national map, winning it three times from 1964 to 1966. The Hall of Famer’s story is not so different from that of the 2016 winner, dual Horse of the Year California Chrome — both Cal-breds were out of inexpensive mares who were bred to young and unproven stallions, both ran well beyond their pedigree expectations and both represent somewhat humble California connections. 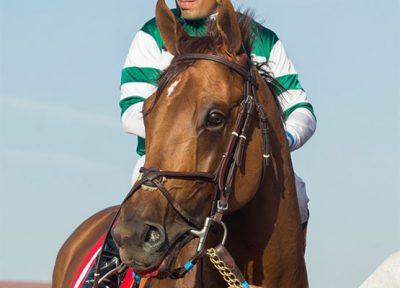 A year ago in the San Diego, Hronis Racing’s Accelerate posted an impressive wire-to-wire victory and also upset Arrogate, who, at the time, was the leading runner in the older handicap division with a string of seven wins in mostly major seven-figure races.

Then, proving his San Diego win was no fluke, the John Sadler trainee finished third in the Pacific Classic before an uncharacteristic ninth in the Breeders’ Cup Dirt Mile (GI) to end the year. Accelerate returned in top shape in 2018 with three wins and two seconds, all in graded stakes company, and shows up here fresh with two months off.

Adding blinkers in last year’s San Diego turned out to be a godsend for the now 5-year-old son of Lookin at Lucky and he’s shown a preference for being on or near the early lead, which has worked well, as he’s has put up some big numbers (his 111 Beyer for Gold Cup at Santa Anita (GI) win is tops in the field). He also likes the distance (5-1-2-2) and the surface (5-3-0-1). His middle post position helps, as does having regular jockey Victor Espinoza back aboard. He carries top weight of 125, which is the same he carried last year and only a pound more than he toted a year ago.

“He he’s doing great and we’ve got a lot more planned for him in the second half of the year,” Sadler said of the earner of more than $1.7 million. “From the Pacific Classic to all the way into the fall.

“He’s been rock solid, he hasn’t run a bad race, going against the tough guys in grade one and grade two stakes. So we’re looking forward to the San Diego.”

Accelerate’s stablemate, Curlin Rules, has been a decent allowance/optional claiming runner but has struggled when tossed into black-type events by his connections, Hronis Racing and Sadler. Overall his numbers just aren’t as good as his stablemates and while he’s won a race here at Del Mar at this distance, he seems just a tad below the talent level needed to be a factor here.

Click HERE  get the latest odds on the San Diego Handicap

Hronis and Sadler send out a third runner in recent optional claiming winner Catalina Cruisier, who is making just his third career start. It’s the first start around two turns for the son of Union Rags and, in a race with so much other talent, he may be up against it from his innermost post position.

Jill Baffert’s Dr. Dorr returns to action off a short rest, but he scarcely ran a lick in the Suburban (GII) at Belmont two weeks ago and was ninth after racing dull and wide. Back in California, trainer Bob Baffert is likely thinking if he runs back to his performance from a decent runner-up finish in the Gold Cup at Santa Anita (GI), where he set all the pace before being run down by Accelerate in the lane, he figures to finish better.

The Californian Stakes (GII) winner will no doubt set the pace under Joe Talamo or sit just off it and, if he shows the same form he did in his last win, he’s certainly a strong contender for the win here. This son of Lookin at Lucky was bred in partnership with the Bafferts, Jockey Club board member Madeleine Auerbach and the late actor Jack Klugman, a big-time racing owner/breeder/fan who owned Jacklin Klugman, who finished third in the 1980 Kentucky Derby.

Slam Dunk Racing, Mansor, Nielsen et al’s Two Thirty Five, who was claimed for $25,000 five starts ago, has more than made his purchase price back with three wins from four starts for his new connections, which include trainer Richie Baltas. This 4-year-old son of Stay Thirsty is accomplished at the distance, with three wins from four starts, has a win from three starts at Del Mar and has been showing sharp improvement with each start since being haltered. He’ll no doubt be up stalking the pace under jockey Franklin Ceballos. And if the leap into deeper stakes company isn’t too much, he could earn a larger share at a decent price.

“He’s a rapidly improving horse,” Baltas said of Two Thirty Five. “He got a 104 Beyer his last time out. He’s three-for-four going long, so we’ll give it a shot. Hopefully he’ll be able to sit right behind the speed and then make a run.”

Harlan Punch makes his first start since winning the Iselin Handicap (GIII) at Monmouth Park three weeks ago for owner/trainer David Jacobsen, and it’s also the confirmed frontrunner’s first Southern California effort. His numbers register just a tad below the top choices, but he is a winner at this distance, even though he seems to prefer a bit shorter. He will have company on the lead from legit speed, so it may be tough for him to pull out the win here. Martin Pedroza rides for the first time.

Though Dabster has won four of six starts, he’s struggled when jumping into stakes company. His most impressive win came over this track last year on Breeders’ Cup Friday, but he’s not done much since. It’s his first start beyond a mile, so maybe this Baffert-trained son of Curlin will like the added distance.

Trainer Mark Glatt rolls the dice for standout turf star Sharp Samura for a main track effort here after winning six of his last eight on the grass. He did break his maiden for $75,000 over Santa Anita’s main track 18 months ago, but has never tried this Del Mar dirt. He has some decent numbers, but they are below the top choices here and this seems a tough spot. He has some good dirt works, but it’s hard to imagine that will be sufficient to bet him with much confidence.

Prince of Arabia seems like his best running has been done on the turf course. He will love the expected decent early pace, but he just seems to be more suited to non-graded and allowance events.

El Huerfano hasn’t won a race in more than a year and was a well-beaten fifth in this race last year. Trainer Pete Miller always does well at Del Mar, but he’ll need more than a successful trainer to be effective here.