Justin Mustari, a 26-year-old from Illinois, is your new National Horseplayers Championship winner, topping a field of 563 bettors and becoming the youngest champion in the 22-year history of the event.

The three-day contest at Bally’s on the Las Vegas strip turned in Mustari’s favor on Sunday – the final day — when he was the only player at the finals table to hit a 19-1 longshot. 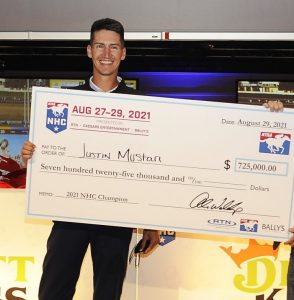 That winning wager clinched the title for the insulation contractor from Des Plaines, Ill., and he collected the top prize of $725,000 as well as an Eclipse Award as the nation’s No. 1 handicapper.

The NHC was the culmination of 256 qualifying preliminary contests sanctioned by the event’s organizers, the NTRA, and held online in 2020, in which 37,730 total entries were whittled down to the finalists.

Contestants made mythical $2 win-and-place bets on a selection of mandatory and optional races from seven racetracks headlined by Saratoga and Del Mar.

Mustari participates in tournaments along with his father Frank Mustari. The younger Mustari compiled a tournament-winning bankroll of $370.80 from 52 races in three rounds to earn the victory by a $23.60 margin over Jose Arias of Bell Gardens, California, who was bidding to become the first two-time winner of the NHC (he won in 2014).

Despite the seemingly wide margin of victory, the contest was one of the closest and most competitive finals in the history of the NHC. The “Final Table” was a see-saw affair between four players throughout Sunday, with six others not far behind and within one longshot winner of reaching the top spot.

Mustari led the tournament after Saturday’s second day, which whittled the field to the top-scoring 10% (56 players) for Sunday morning’s semifinal round. The 56 semifinalists then were pared down to the top 10.

Mustari lost the lead earlier on Sunday as the top spot went back and forth between Arias and eventual third-place finisher Chris Goodall of Winter Park, California, but he stayed within striking distance in fourth-place until the final and deciding race of the tournament in Race 8 at Del Mar, a 1-mile allowance optional claimer on the turf with a full and evenly-matched field.

Mustari was the only one to select 19-1 winner Rose’s Crystal, who paid $41.80 to win and $16.40 to place which was more than enough to give Mustari the victory.

“I had to give myself a chance to win. I had to find something in that odds range to get me there. I thought this horse had a chance,” said Mustari, who plans on using his prize money to buy a house.

The NHC awarded $2.2 million in prize money to the top 56 finishers, and nearly $700,000 more was won by the top 20 finishers in the NHC Tour, a year-long points series comprised of on-track tournaments and online handicapping contests.

The NHC Tour Champion for 2020 was Sally Wang Goodall of Las Vegas. Wang Goodall is a 19-time NHC finals qualifier who was also inducted into the NHC Hall of Fame over the weekend.