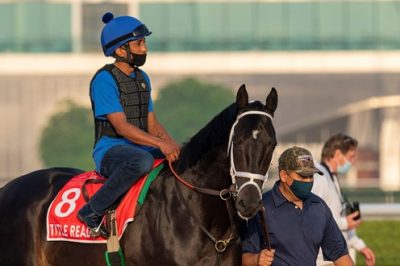 Most handicappers will need only a quick glance at this 7-year-old’s past performances before tossing him out. He’s lost seven of his last eight races, with the victory coming last January in the Fair Grounds‘ Grade 3 Louisiana Stakes. That’s his only graded-stakes win in 11 tries.

Trainer Dallas Stewart likes to aim high, so he sent Title Ready to the 2021 Dubai World Cup (11th), 2020 Clark Stakes (10th) and 2020 Breeders’ Cup Classic (seventh). There’s no reason to believe he’ll do any better against superstars Knicks Go and Life Is Good. If Title Ready plods up for fifth or sixth in the Pegasus, he’ll add to owner Charles Fipke’s account, but he won’t do the bettors any good.

Betting advice: I wouldn’t put a dime on this guy, who’s in way over his head.

Notes: Stewart, a 62-year-old native of Mississippi, is a bright, personable guy with a good sense of humor. He’s made numerous splashes in the Triple Crown without ever winning. He ran second with Kentucky Derby longshots Golden Soul (34-1, 2013) and Commanding Curve (37-1, 2014). He also completed the Preakness exacta with Macho Again (39-1, 2008) and Tale of Verve (28-1, 2015). If you wheeled those four under favorites Orb, California Chrome, Big Brown and American Pharoah, you struck gold and blessed Stewart’s name … His specialty is preparing closers with distance pedigrees to peak at 1 1/8 and 1 1/4 miles. Many of his 2-year-olds find their early races too short to do their best.