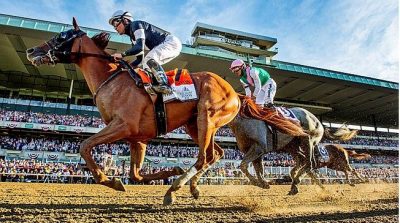 The upset winner of the 2019 Belmont Stakes, Sir Winston finds himself in the best form of his career as he starts his 6-year-old campaign.

While beaten Belmont favorite Tacitus got some revenge the following year in the Suburban, this son of Awesome Again looks to dial back the distance to try to win at 1 1 /8 miles.

Sir Winston finally gets his shot at the Pegasus after an injury to his left ankle in 2019 derailed trainer Mark Casse’s plans for him. His return to the races as a prep in the Woodchopper Stakes at the Fair Grounds resulted in a last place finish in a field of 12.

Casse shipped him down to Palm Meadows where he has been working forwardly after finishing his 2021 campaign on a high note at Woodbine with a win in the Valedictory at 1 ½ miles.

While four of Sir Winston’s six career wins have come over an all-weather surface at Woodbine, the other two victories tell a different story. Besides the 1 1/2-mile win in the Belmont, he notched a gutsy closing win in an allowance optional claiming race at Aqueduct going a one-turn mile.

Sir Winston’s apparent preference for the synthetic surface doesn’t deter Casse. “He’s a pretty good horse. If he can have the same type of form on dirt that he does on the synthetic, he’ll be a force.”

Betting advice: The best opportunity for Sir Winston is if Knicks Go and Life Is Good lock up in a duel on the front end. He is better suited for longer distances but is in the best form of his career. Expect him to be a factor late and don’t dismiss him on the bottom of your exotic wagers.

Notes: Sir Winston has gotten better with age. He has finished first or second in his last four starts, including a win in the Grade 3 Valedictory at Woodbine after a year off. He looks to build off four straight races with an Equibase speed figure over 100.