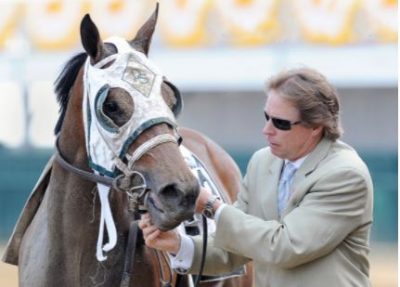 From four starters in his own name so far in the Kentucky Derby (GI), Dallas Stewart has sent out two second-place finishers — Golden Soul in 2013 and Commanding Curve in 2014. But that’s not to say the Mississippi native hasn’t had experience with his fair share of classic runners. He served as chief assistant to Hall of Famer D. Wayne Lukas for 12 years and worked with Derby winner Thunder Gulch, as well as Timber Country, Tabasco Cat and slew of other Grade I winners and champions before going out on his own in 1997.

In 1999, Kimberlite Pipe won the Louisiana Derby (GII) en route to a sixth-place finish in the Derby in what was Stewart’s first starter in the Run for the Roses. The following year, Dollar Bill finished 14th in the Derby before picking up a pair of fourths in the Preakness Stakes (GI) and Belmont Stakes (GI).

This year, Stewart will send out Louisiana Derby runner-up Tom’s Ready, a $145,000 son of More Than Ready owned by GMB Stable. Tom’s Ready had some trouble in his final Derby prep, bumping with a rival out of the gate and racing extremely wide before closing mildly to finish second. Over the past 25 years, nine runners finished second in their final prep for the Run for the Roses, so a victory for the colt would not be unprecedented. Tom’s Ready was one of the first to arrive at Churchill Downs and has been training under the Twin Spires all month, including a bullet half-mile April 7 and an easy five-eighths last week.

Click HERE for current odds to win the 2016 Kentucky Derby.