Twelve fillies and mares were invited to the 1 1/16-mile race, including likely favorite Regal Glory, along with Sweet Melania, Shifty She, and Nicest. 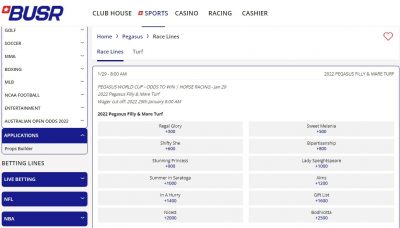 Regal Glory, a 6-year-old chestnut mare trained by Chad Brown, comes into the race off her first Grade 1 victory, in the Matriarch Stakes at Del Mar on Nov. 28. A daughter of 2011 Kentucky Derby winner Animal Kingdom, Regal Glory is the 3-1 betting choice at BUSR.ag

Owned by Peter Brant, Regal Glory has a career record of 16-9-4-0 and earnings of $1,244,884. She is versatile, having won the Matriarch gate-to-wire; can race in mid-pack and win; and seems comfortable stalking the leaders.

Sweet Melania, trained by Hall of Famer Todd Pletcher, makes her 5-year-old debut after closing out 2021 with a victory in the Suwanee River Stakes (G3) at Gulfstream on Dec. 18. It was her first win in 18 months and ended a seven-race losing streak.

Hall of Famer John Velazquez is in Florida this weekend for the Pegasus and has the mount aboard this daughter of Triple Crown winner American Pharoah. She is 5-1 at BUSR.ag

“It’s always exciting to be the first sportsbook putting lines out — and it’s a real guessing game before the draw. Regal Glory is the obvious favorite, but the next few days should shape whether she goes off a +100 shot or nearer to +400. Since going live with our odds, she’s the most popular with our punters,’’ BUSR spokesman James Ross said.

“The Sweet Melania versus Shifty She battle is an interesting one after the Suwannee, where Velazquez timed his move perfectly to beat long-time leader Shifty She. We make Sweet Melania a +500 shot opposed to Edwin Gonzalez’s mount at +600 and we’re confident that both will be making the trip to Gulfstream.” 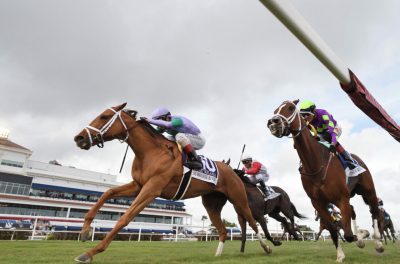 Nicest, also a daughter of American Pharoah, has only a maiden win nine starts, but finished second in the American Oaks (G1) at Santa Anita on Dec. 27 for trainer Michael McCarthy. Katsumi Yoshida owns the Ireland-bred 4-year-old. Nicest is 20-1 at BUSR.ag

Among other invitees are Bodhicitta, a 6-year-old England-bred mare, who ships in from California (25-1) for trainer Richard Baltas, and Summer in Saratoga (10-1) for trainer Joe Sharp.