In the days leading up to the $3 million Pegasus World Cup Invitational (G1) at Gulfstream Park in Hallandale Beach, Florida, usracing.com is publishing profiles of the horses in the race set for Saturday, Jan. 29. The profiles will be updated with morning-line odds and post positions following the draw. 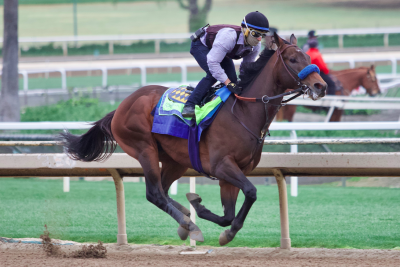 Once the early favorite for the last year’s Kentucky Derby, Life Is Good shook off any vestiges of a hind ankle injury with powerhouse wins in the Kelso (G2) and the Breeders’ Cup Dirt Mile (G1) to emerge as the most serious threat to dethrone 2021 winner Knicks Go in the 1 1/8-mile Pegasus World Cup Invitational.

Favored in each of his six career starts, Life Is Good has been headed but once, that coming in the final yards of the H. Allen Jerkens Memorial (G1) at Saratoga Race Course in his return to racing. Whether it was the nearly six-month long layoff or an overly confident ride from Hall of Famer Mike Smith, Life Is Good re-rallied belatedly only to finish a neck behind Jackie’s Warrior in the 7-furlong race.

Facing older horses at a flat mile in his next two starts, Life Is Good gave every indication an extra furlong would be well within his scope as he rolled to a 5 ¾-length win in the Kelso and a visually similar 5 ½-length score in the BC Dirt Mile.

In his first three starts, the Into Mischief gelding was 3-for-3 for Hall of Famer Bob Baffert in California, breaking his maiden at Del Mar and winning the Sham (G3) and San Felipe (G2) at Santa Anita Park. After surgery to remove the ankle chip, he returned to training on June 24, when WinStar president/CEO and racing manager Elliott Walden announced Life Is Good would be moved to Pletcher from Baffert, then banned from racing in Kentucky and New York.

Betting advice: Should be up front in the stretch run and could pull off the victory if he can carry his speed 1 1/8 miles.

Notes: Although he has never raced in Florida, Life Is Good has been stabled at Palm Meadows Downs since mid-December and has been working steadily towards his 4-year-old debut. On Jan. 15, the Into Mischief gelding breezed 5 furlongs in 1:00.36 and left trainer Todd Pletcher impressed. “He seems to be every bit as good or better than he was going into the Breeders’ Cup.”