The Farrell Report: Knicks Go-Life Is Good Showdown Should Be a Doozy; Derby Preps Update 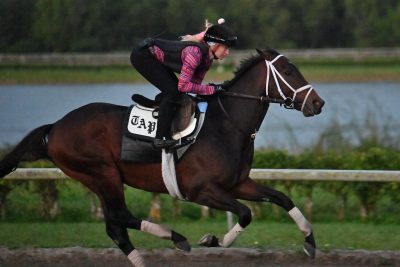 Trainer Todd Pletcher was humming a happy tune after watching Life Is Good turn in another sharp workout in preparation for the $3 million Pegasus World Cup Invitational (G1) on Saturday at Gulfstream Park.

The Pegasus is the first major stakes of the new year, and features a heavyweight battle between Life Is Good, the Breeders’ Cup Dirt Mile (G1) winner, and Knicks Go, the presumptive 2021 Horse of the Year and defending Pegasus champion.

It should be a dandy, a knockdown battle to determine the fastest of the fast. Both top Pegasus contenders are blessed with dazzling early speed. It should be a full-tilt fight, right from the break. The Pegasus will be the first start for both Life Is Good and Knicks Go since the Breeders’ Cup.

Life Is Good breezed 5 furlongs in 1:00.90 over a fast main track at Palm Beach Downs on Saturday, the seventh work since the 5 ¾-length triumph in the Dirt Mile Nov. 6. The Pegasus, at 1 1/8 miles, will be his first attempt beyond a mile.

“It was another super breeze. He looked awesome, moving really well, in hand throughout,” Pletcher said. “It’s kind of what we’ve been seeing every week. Just beautiful action and does things effortlessly. We couldn’t be more pleased with how he went.”

Fair enough. There were similar glad tidings from down in New Orleans where Knicks Go turned in his final drill at the Fair Grounds: 5 furlongs in 1:00.40 on Sunday. It was the fastest move of 57 at the distance that morning.

“He breezed good, and we’re really happy with him,” trainer Brad Cox said. 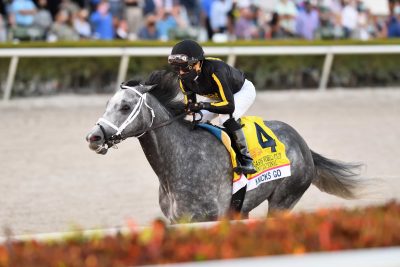 Knicks Go captured this race by 2 ¾ lengths last January, the start of a campaign that culminated with a take-no-prisoners front-running score in the Classic (G1).

And so, the stage is now set with post positions slated to be drawn on Tuesday.

Of course, it will be more than a two-horse race. Or will it?

It will be a festive week at Gulfstream, starting Wednesday with a $500,000 guarantee for the Rainbow 6 jackpot payoff if there is only one lucky winner of the 20-cent bet.

Multiple tickets with all six winners were sold Sunday, each worth $3,806.06. The popular multi-race wager has gone unsolved for eight consecutive racing days since a $159,442.38 payout Jan. 13.

Then comes Saturday and the stakes-laden card that also includes the $1 million Pegasus World Cup Turf Invitational (G1) and the $500,000 Pegasus World Cup Filly and Mare Turf (G3). First post will be at 11:30 a.m. ET; NBC provides network coverage from 4:30 to 6 p.m. ET.

On the Triple Crown trail

A dozen horses remained under consideration for the $750,000 Southwest Stakes (G3) for 3-year-olds on Saturday at Oaklawn. The 1 1/16-mile Southwest is Oaklawn’s second of four Kentucky Derby qualifying races, offering 10 points to the winner.  Dash Attack, Barber Road, Ignitis, Vivar and Barber Road, the 1-2-3-5-7 finishers, respectively, in Oaklawn’s $250,000 Smarty Jones Stakes back on New Year’s Day are slated to return for the Southwest.

The Southwest is expected to attract two shippers from Southern California – one for Hall of Fame trainer Bob Baffert (Messier or Newgrange) and one for trainer Doug O’Neill (Slow Down Andy).

Lecomte Last weekend’s Lecomte Stakes (G3) at the Fair Grounds did little to clarify the Derby picture as Call Me Midnight sprang a 28-1 upset, flying from the back of the pack to nip pacesetter Epicenter (8-5) by a head. The 3-year-old son of Midnight Lute, ridden by James Graham for trainer Keith Desormeaux, completed 1 1/16 miles over the fast track in 1:44.36. The victory earned Call Me Midnight 10 points on the Road to the Kentucky Derby.

Pool 2 of the Kentucky Derby Future Wager didn’t offer many clues either as it closed Sunday with “All Other 3-Year-Olds” as the 9-5 favorite. Smile Happy, unraced since winning the Kentucky Jockey Club Stakes (G2) in late November, was the 8-1 second choice.