A rainy opening day at Oaklawn Racing Casino Resort was all about Hall of Famer Steve Asmussen kicking off his quest for that elusive victory in the Kentucky Derby.

With the results, Asmussen now has three of the top point leaders early on the Road to the Derby. 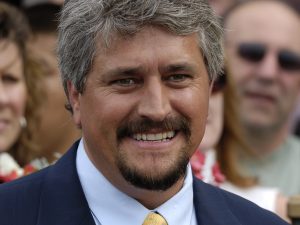 Last year’s Smarty Jones winner was Spun to Run, who upset Omaha Beach in the Breeders’ Cup Dirt Mile (G1), and, along with Omaha Beach, was scratched out of Saturday’s $3 million Pegasus World Cup at Gulfstream Park.

Shoplifted won the Springboard Mile at Remington Park on Dec. 15 for his first 10 qualifying points, while Silver Prospector took the Kentucky Jockey Club (G2) at Churchill Downs on Nov. 30 for his first 10 points.

The Southwest Stakes (G3) is the next Derby prep race on the Oaklawn calendar, set for Feb. 17.

Asmussen, trainer of two-time Horse of the Year Curlin as well as champion Rachel Alexandra, is 0-for-20 in the Derby with two runner-up finishes (Lookin At Lee, 2017l Nehro, 2011).