The Breeders’ Cup Championship culminates the racing season and crowns the fleetest sprinters, the most promising two-year-olds, the best turf horses. At $2 million, the Breeders’ Cup Juvenile is the richest 2-year-old race in North America. The 1 1/16 mile race, restricted to male 2 year-olds, is often a preview of the stars of the Triple Crown races for the following year. 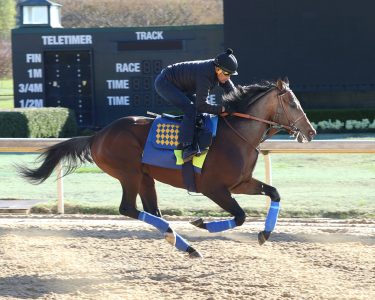 The Breeders’ Cup Juvenile (G1), which is sponsored this year by TVG and worth $2 million, is one of the seven original Breeders’ Cup races contested at the inaugural world championships event in 1984. The 1 1/16-mile main track test is more often than not the predictor of who will win the Eclipse Award for the division and also seals the winner’s status as the early favorite for the following year’s Kentucky Derby (G1).

Chief’s Crown, trained by Roger Laurin, son of Secretariat’s trainer Lucien, won the first Breeders’ Cup Juvenile at Hollywood Park under jockey Don Macbeth. He was the first winner of the race to be crowned champion 2-year-old and since then 27 more (from 36 runnings) also earned the honor.

The last juvenile to be named Horse of the Year and the first since Secretariat in 1972 was Favorite Trick, who won this race in 1997 at Hollywood Park before earning the year-end honor. He was undefeated in all of his eight starts as a 2-year-old for owner Joseph LaCombe and trainer Patrick Byrne.

One of the most famous Breeders’ Cup Juvenile performances was Arazi’s run in 1991, who launched a powerful late run from the back of the pack in the early going to storm home a five-length winner.

The fastest running at the current distance is the 1:40.94 that Midshipman clocked when he won at Santa Anita in 2008.

The Breeders’ Cup Juvenile Fillies Turf, first inaugurated at Santa Anita Park in 2008, will be contested for the 13th year this year as part of the Breeders’ Cup World Championship “Future Stars Friday” program on November 6. The one-mile turf event is for 2-year-old fillies. After two years as a non-graded stakes, it received its grade 2 status in 2010 and has been a grade 1 since 2012.

Eclipse Award-winner Chad Brown has dominated this race having sent out five winners, including inaugural winner Maram. His other winners are Lady Eli, New Money Honey, Rushing Fall and Newspaperofrecord. Both Javier Castellano and Irad Ortiz have won aboard two and all four of the wins combined were on the runners trained by Chad Brown.

Lady Eli is the only Breeders’ Cup Juvenile Fillies Turf winner to earn year-end honors, but she earned it as an older mare when her connections took home the Eclipse Award as the 2017 older turf female.

Last year, Sharing took home the victory in this race. The Graham Motion-trained Speightstown filly is a daughter of 2010 Breeders’ Cup Filly & Mare Turf winner Shared Account, who was also conditioned by Motion. Sharing is expected to line up in the gate for this year’s Filly & Mare Turf on Saturday.

The Breeders’ Cup Juvenile Fillies one of the initial seven races that have been run each year since the inaugural event at Hollywood Park in 1984. It is the main event in deciding who will win the Eclipse Award as champion 2-year-old filly and of the 36 winners of the race, 32 have earned the year-end championship honor.

Of the four Eclipse Award winners who didn’t win the Breeders’ Cup Juvenile Fillies, one finished first but was disqualified (She’s A Tiger in 2013 was placed second behind Ria Antonia for interference in the stretch.) The others — Chilukki (1999) and Family Style (1985) were both second in this race while Golden Attraction (1985) was third. Outstandingly in 1984 finished second in the Breeders’ Cup, but was elevated to the win after the disqualification of rival Fran’s Valentine.

This year marks the third running of the Breeders’ Cup Juvenile Turf Sprint, which this year is a 5 ½-furlong dash for 2-year-olds of either sex. The distance depends on the host track’s capability to run the distance and in some cases the distance is shortened to five furlongs to accommodate the turf sprinting limitations as it was at Churchill Downs in 2018.

This race was run for the first time in 2018 during the first day of the Breeders’ Cup at Churchill Downs and was ungraded. Last year it was a grade 2 and carries the same grade this year.

In 2018, WinStar Farm, China Horse Club and SF Racing’s Bulletin was a 2 ¾-length winner under the Twin Spires and though not officially listed as retired, the Todd Pletcher-trained son of City Zip hasn’t raced since June and only earned a single win in non-graded stakes company in seven starts since. Last year’s winner, Four Wheel Drive, went on the shelf after the Breeders’ Cup and returned with a dismal seventh-place finish in allowance company back in May, but is back in training and working out for trainer Wesley Ward at Keeneland.