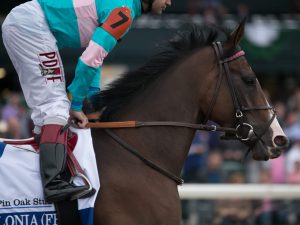 The coronavirus pandemic has knocked everyone off balance.

That’s especially true of the racing industry which is staggering like a barroom patron who had one pint too many on St. Patrick’s Day.

Some tracks are shut; others are running minus spectators. The stakes schedule is in tatters, now that the Kentucky Derby (G1) made the stunning announcement that this year’s race will shift from the traditional first Saturday in May to the first Saturday in September.

Conceivably, 3-year-olds prepping for the Derby will now use races like the Haskell Invitational (G1) or the Travers (G1) as preps for the big show.

So where does that leave the Louisiana Derby (G2) on Saturday? The traditional stop on the Road to the Derby will be contested before an empty grandstand at the Fair Grounds.

There is still a $1 million purse on the line and 100 qualifying points to the winner, guaranteeing a starting spot in the Kentucky Derby.

Is it still as meaningful, if the ultimate goal is over five months away?

The Louisiana Derby has been lengthened this year to 1 3/16 miles from 1 1/8 miles. The runners will now have a long run down the stretch before hitting the first turn.

As handicappers, we often fall into the trap of assuming more distance tilts the outcome in favor of closers.

Trainer Mark Casse hopes that applies as he sends out morning-line favorite Enforceable (7-2) and Lynn’s Map (30-1).

Enforceable is the tepid favorite in the 14-horse field. The stretch runner will be making his third start at the meet, having won the Lecomte (G3) in January before rallying for second in a division of the Risen Star (G2) behind the pacesetting Mr. Monomoy last month.

Enforceable rallied from last in the Risen Star after an extremely wide trip before kicking home solidly down the center of the track.
In contrast, Mr. Monomoy did his work on the front end and was rewarded with a one-length victory.

Unfortunately, the colt trained by Brad Cox is now sidelined with what has been described as a minor ankle injury in a routine gallop.

With the Derby postponed until September, Mr. Monomoy, a half-brother to champion Monomoy Girl, should have plenty of time to recuperate.

Cox has another ace up his sleeve for the Louisiana Derby, and it could spell more trouble for Enforceable. He’ll send out Wells Bayou, second most recently to Silver Prospector in the Southwest (G3) at Oaklawn Park.

He looks like the dominant speed in this race, a matter of major concern for Casse.

“We need some pace,” Casse said. “It looks like Brad Cox has got another horse that looks like he’s the big speed. I’m just hoping he doesn’t pull another Mr. Monomoy on us. Hopefully there is more than one speed in there.”

Perhaps there will be, but Wells Bayou looks like the swiftest of the swift after setting a blistering pace in the 1 1-16 mile Southwest only to lose by one length.

“The biggest reason we chose the Louisiana Derby over the Rebel (G2, won by Nadal on the front end last weekend) at Oaklawn is the distance,” Cox said of the 8-1 shot. “I just think this horse needs more than a mile and a sixteenth.”

He’ll certainly get that at the Fair Grounds.

“The horse has a big shot,” Cox said. “I think the pace will be a little kinder in the Louisiana Derby opposed to the race at Oaklawn. We wanted to be forwardly placed, and given the distance, there probably won’t be as much pressure up front.”

That could be bad news for Enforceable, and everyone else, hoping to run down the frontrunner.

Cox also sends out Shake Some Action (15-1), a winner of two straight at the meet making his stakes debut.
Modernist (6-1) took the other division of the Risen Star for Hall of Fame trainer Bill Mott. He got the worst of it in the Louisiana Derby draw with post 14.