In the days leading up to the $20 million Saudi Cup (G1) at King Abdulaziz Racetrack in Riyadh, Saudi Arabia on Feb. 26, usracing.com is publishing profiles of the likely starters in the world’s richest horse race. Profiles will be updated with odds, post positions and jockeys several days before the race. 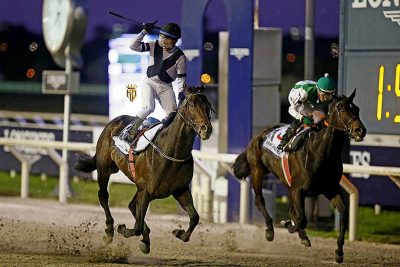 Aero Trem, the best horse in South America, will be the continent’s first runner in the Saudi Cup. The 7-year-old won the 1 1/4-mile Gran Premio Latino Americano, South America’s most prestigious race, in October at Maronas Racecourse.

“It was a great day,” trainer Antonio Cintra said. “It was in Uruguay, it was my first Gran Premio Latino Americano, and it was only the second time in 38 years that a horse from Uruguay won it, so it was amazing.”

That performance convinced Cintra, a four-time champion trainer in Uruguay, to go for glory and megabucks against some of the world’s top thoroughbreds.

The Brazil-bred already has overcome long odds. He nearly died of colic in 2018 after being denied Uruguay’s Triple Crown in the final leg.

“It was a huge surgery and amazing work from the vets,” assistant trainer Julio Olascoaga said. “He lost about 330 pounds and it took a lot of time for him to recover.”

Olascoaga has been supervising Aero Trem’s preparations since they arrived in the Middle East in December.

“It’s unbelievable where this horse can take us,” he said. “It’s not just important for us, it’s important for Uruguay and South America.

“It’s about putting our horses on the world stage to see where we are. When you compete against the best, it makes you better.”

Betting advice: Aero Trem looks like a live longshot. He’s proven himself time after time in major races, and he’ll be a huge price. His opening odds at BUSR are 40-1, so a small across-the-board bet makes sense.

Notes: Aero Trem also has won five Grade 1 races in Brazil, three at a mile and two at 1 1/4 mile … His ability to stay 10 furlongs in top company is even more impressive because his pedigree is so speed-packed. His sire, Shanghai Bobby, and his damsire, Gilded Time, were outstanding in sprints as 2-year-olds. Both were undefeated winners of the 1 1/16-mile Breeders’ Cup Juvenile, but neither ever won a longer race.