Note: All times are EDT

From Florence, Kentucky to Hallandale Beach, Florida to Dubai in the United Arab Emirates, a blockbuster day of racing is on tap Saturday, allowing fans and handicappers to tune in and show off their wagering acumen. 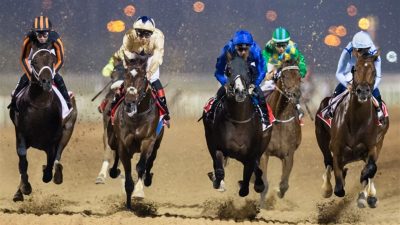 Earlier on Dubai World Cup Day at Meydan Racecourse, the first of three Kentucky Derby prep races will take place – the $750,000 UAE Derby (G2). The race will also be televised by FS1, as will several other stakes from Dubai, including the $5 million Dubai Sheema (G1) featuring $20 million Saudi Cup winner Mishriff.

Back in the USA

Saturday is the biggest day yet on the road the Derby on the first Saturday in May, with a total of 37 3-year-olds entered in the three preps – all of which offer Derby qualifying points of 100-40-20-10 to the first four finishers.

When the day is over, it’s possible that six or more horses could earn enough points to reserve a spot in a 20-horse field for the Derby.

Where and when to watch

Other stakes that will be televised include the Dubai Sheema Classic (G1), and the UAE Derby (G2).

NBCSN will air live coverage of the Florida Derby from 6-7 p.m.

With that, the Florida Derby will air on FS2, preceded by the Jeff Ruby Steaks, which has a 6:25 p.m. post time.

Gulfstream Park: Sunny with temperatures in the mid- to high 70s.

Meydan Racecourse: Afternoon and evening temperatures range from the low 90s and falling into the mid- to high 80s around Dubai World Cup time [12:50 p.m., but 8:50 p.m. local time].

Hush of Storm, winner of the John Battaglia Memorial winner, and Grade 1 winner Gretzky the Great top the 12-horse field for the 1 1/8-mile race on the synthetic Tapeta surface. Also worth considering is Holy Bull (G3) runner-up Tarantino.

Greatest Honour, winner of the Holy Bull and Fountain of Youth (G2) goes for the Gulfstream sweep of Derby preps as the 6-5 favorite in a field of 11. He’s a closer, so the finish could be exciting, especially with Hall of Famer trainer Bob Baffert sending out his first Florida Derby starter, Spielberg. A field of 11 is set for the 1 1/8-mile key Kentucky Derby prep. Known Agenda Collaborate, and Soup and Sandwich are also in the field.

Trainer Ken McPeek looks to win this one for the second year in a row. He sent out Swiss Skydiver to win this in 2020, and she went on to beat the boys in the Preakness (G1) and be voted 3-year-old filly champion. On Saturday, he sends out Crazy Beautiful in this Kentucky Oaks (G1) qualifier which offers points of 100-40-20-10 to the first four finishers.

An international field of 14 is set for this 2,000-meter [about 1 1/4 miles] 25th edition of the World Cup. Mystic Guide, winner of the Razorback Handicap (G3) to kick off his 4-year-old campaign, is among the favorites, along with Jesus’ Team, Military Law, and Magny Cours. The winner earns $6.9 million.

Saudi Cup winner Mishriff returns to more familiar turf in this 12-furlong test a month after winning the $20 million Saudi Cup on dirt. A field of nine is entered, including the Bill Mott-trained Channel Maker, the 2020 Eclipse Award winner as champion turf male.

Not a field of well-known 3-year-olds, but 14 are entered including several Triple Crown nominees, including Rebel Romance, France Go De Ina, and Speight’spercomete. U.S.-based horses in the field include Ambivalent and Lugamo. Two fillies are entered: Soft Whisper and Mnasek.

The final points-earning prep on the Japan road to the Derby but most of the top dirt horses will be racing in Dubai. This will be a full field of 14, with Ladybug, a filly, among the contenders. The winner earns 40 Derby qualifying points and would be the top point-earner from Japan, which gets one entry into the Derby field of 20.

Other stakes of note: