The Farrell Report: Giving Thanks to Horse Racing

Thanksgiving is here again, that time when we pause to acknowledge our many blessings.

There are multiple reasons for racing fans to reflect on this past season.

We can all give thanks this for:

Fans in the stands. Even though capacity was capped for many major stakes, it was reassuring to see people back in the seats and hear the cheers, and occasional jeers, from the grandstand. The game thrives on that give and take between the human and equine athletes on track and those with wagers on the outcome. May we never lose that again.

The horses, trainers, jockeys and backstretch workers who soldiered on through two challenging pandemic years. While other sports curtailed their schedules, racing fans had a steady, although reduced, diet of action to keep us entertained and challenged through bleak times.

The enhanced safety protocols for major races. We escaped without a catastrophic breakdown in the highest-profile stakes. The sport has taken measures to ensure that our showcase horses are safe and sound when the spotlight is on the game. You can argue that they might have gone too far, as evidenced by the chaos surrounding the Breeders’ Cup Juvenile Turf (G1) but in the long run, better safe than sorry. There are too many enemies, especially the radical animal rights groups, waiting to pounce on the next mishap. The less ammunition they get, the better.

Better vigilance to root out cheaters on all levels. The sport is trying to clean up the game. There is no need to again list the culprits with multiple medication violations. Suffice it to say, we know who you are. We finally have the sense that regulators, largely negligent in the past, have finally stepped up their game. Here’s hoping those still skirting the rules either shape up or get permanently shipped out.

The sporadic tickets we cash. As the old expression goes, the blind squirrel finds an occasional acorn. The game is not easy, but we embrace the challenge. Solving the puzzle can bring ample rewards that make the quest worthwhile.

Thanks: And finally, a note of thanks to you, the loyal readers of this column. Your continued support and interest make it all worthwhile.

Thanksgiving weekend offers one of the final clusters of stakes for 2021. Everywhere you look there’s a major race from New York to California to Kentucky.

Speaking of Kentucky, it is closing weekend at Churchill Downs with the $750,000 Clark Stakes (G1) on Friday the main attraction.

As usual, the Clark attracted a top-notch field topped by the farewell appearance of Maxfield. The 4-year-old Godolphin homebred heads off to stud duty after this final race, leaving behind a legacy that feels incomplete. 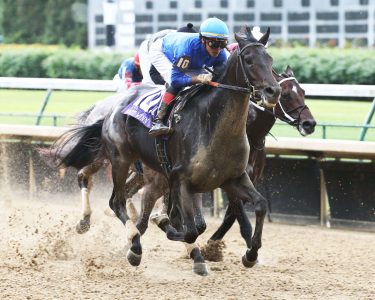 Maxfield always promised more than he delivered. He enters the Clark with a stellar 7-2-1 mark in 10 races, all stakes except for his debut.

Injuries knocked him out of the 2019 Breeders’ Cup Juvenile (G1) and the 2020 Triple Crown. In a sense, he has always been playing catch up, trying to overcome the lost time and opportunities.

Now it is the end of the journey with one last try over his favorite track. Maxfield is 4-for-4 at Churchill including stakes wins in the 2020 Matt Winn (G3) and the Alysheba (G2) and Stephen Foster (G2) earlier this year.

His last two races were in New York, a pair of seconds in Grade 1 races: first to presumptive Horse of the Year Knicks Go in the Whitney at Saratoga, and then to Art Collector as the 9-10 favorite in the Woodward at Belmont Park.

Jose Ortiz will fly in for the riding assignment.

The biggest challenge figures to come from Midnight Bourbon who has been freshened by trainer Steve Asmussen since turning in a solid second in the Pennsylvania Derby (G1).

Like Maxfield, Midnight Bourbon has endured his share of hard luck. The roughest knock was the Haskell Stakes (G1) at Monmouth Park where he was knocked off his feet by Hot Rod Charlie. He is only 1-for-8 on the season but this does not tell the full story.

He missed by only a neck to Essential Quality in the Travers Stakes (G1) at Saratoga and had a trouble-filled trip to finish eighth in the Kentucky Derby (G1). This is his first race back at Churchill Downs since the first Saturday in May. Breaking from the rail with Joel Rosario aboard for the first time, Midnight Bourbon might just be ready to close his campaign with a statement race of his own.