Congratulations Knicks Go, you’re the Horse of the Year, and you did it by leading from start to finish, as usual. 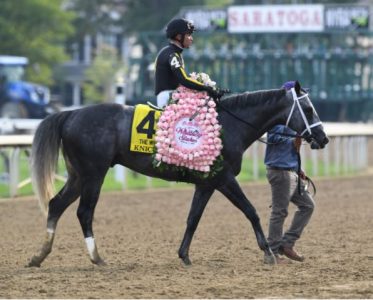 Zipping to the lead on the first jump out of the gate, the striking gray Knicks Go was never seriously challenged by any of the other expected speedballs and cruised to a 2 ¾-length victory in the $6 million Breeders’ Cup Classic at Del Mar on Saturday.

The dominating win over seven rivals, including Kentucky Derby (G1) winner Medina Spirit (second) and his stablemate Essential Quality (third), put the Brad Cox-trained Knicks Go ($8.40) far above all the others.

Joel Rosario, enjoying one of the best years of his career, was aboard for the ride, and pumped his right hand into the air well before the finish line. It was Rosario’s 15th Breeders’ Cup win.

“He just likes to run,’’ said Rosario, who also won Friday’s Juvenile Fillies (G1) aboard Echo Zulu. “He was like, ‘c’mon and chase me.”

Chase they did, but to no avail. With Knicks Go, the 3-1 second choice behind Essential Quality (9-5), setting early fractions of 23.16 seconds for the first quarter, 45.77 for the half and 1:10.04 for three-quarters, not one horse pressed him for the lead. Not Bob Baffert’s Medina Spirit, not Art Collector, not Max Player. And Essential Quality was cruising in mid-pack when he’s usually up near the lead.

Once the field hit the far turn, it was all but over Knicks Go pulled away and everyone else was left in the dust. And to think, there were questions about Knicks Go’s ability to run 1 ¼ miles for the first time.

“He’s a tremendous horse, he’s a champion now,’’ said Cox, who won four Breeders’ Cup races a year ago, and now has his first Classic win. “I’m proud of his performance.”

With top mare Letruska beaten in the Distaff (G1) earlier in the day, Knicks Go’s win all but seals the deal for Horse of the Year honors. Owned by Korea Racing Authority, Knicks Go is 5-0-0 in seven races this year, including the Pegasus World Cup (G1) to start the year, and the Whitney (G1) at Saratoga over the summer.

Knicks Go is the sixth horse to win two different Breeders’ Cup races – he won the Dirt Mile in 2020.

“I feel fantastic. It was tough to watch both of those horses run against each other,’’ said Cox. “It will kind of take a while for this to sink in. I’m very proud of both horses. It was a big effort by both horses. They showed up and ran their races. It was a big day.”

The 1 ¼-mile Classic was the grand finale of the two-day, 14-race, $31 million Breeders’ Cup. The 38th edition was held at Del Mar for the second time, and about 20,000 spectators were at the track each day.

In the other dirt races on Saturday: 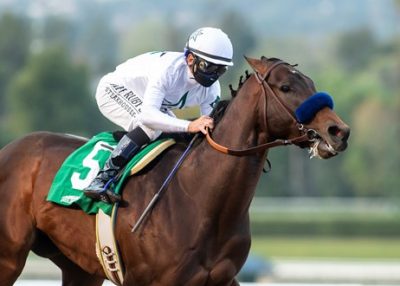 The turf race winners were:

In the biggest upset of the 38th Breeders’ Cup, it was Marche Lorraine at 49-1 odds – the second longest shot in Distaff history — nosing out Dunbar Road and giving Japanese trainer Yoshito Yahagi his second and the country’s first two wins in the Breeders’ Cup. Yahagi won with Loves Only You earlier in the day in the Filly & Mare Turf.

Letruska, the 8-5 favorite, was a contender for Horse of the Year honors if the 5-year-old mare was able to win. But her chances ended due to a crazy fast pace set by Private Missions of early fractions of 21.84 and 44.97 for the half mile. By the time the 11-horse field turned for home, the closers came flying through the stretch.

Ridden by Oisin Murphy, England’s top rider the past three years, Marche Lorraine, who was running in her first Grade 1 in her 21st start, came through with the shocking victory. She was 0-for-3 in G3s in Japan.

In the stretch, Royal Flag and Clairiere were on the outside of Marche Lorraine, and Dunbar Road and Malathaat were surging on the inside. The winner first put way the challengers on the outside, and then fought off the bid by Dunbar Road.

“An amazing day, I couldn’t be happier, said Murphy, who won his first Breeders’ Cup race. “I sat on her during the week in morning exercise and she felt good. They went very fast on the front end which helped me. I’m very grateful to the owners for putting me up. I love riding in Japan so to have a Japanese winner at the Breeders Cup, it couldn’t be better.” 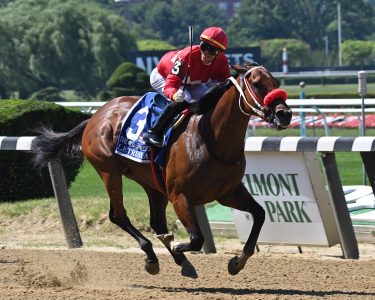 “They went too fast,’’ said Ortiz. “They didn’t want her to be on the lead. They went after her. She wants to run, and I tried to slow her down as much as possible, but it didn’t work out.”

Chad Brown, who trains Dunbar Road, called it the toughest loss he’s ever had.

“I need to watch the replay. It’s a tough beat,’’ said Brown. “I thought we got the head bob, there. It’s probably the toughest loss I’ve ever had.” 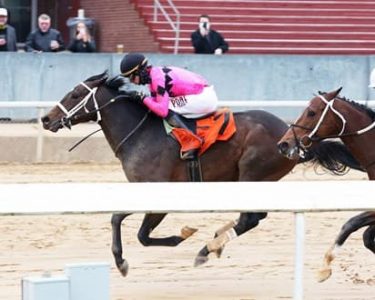 There was no wire-to-wire win in this thriller that saw 11-1 longshot Aloha West nip Dr. Schivel by a nose after closing with a sensational rush through the stretch.

Trained by Wayne Catalano and ridded by Jose Ortiz, the 4-year-old colt defeated a slew of veteran horses, including retiring 6-year-old Firenze Fire (0-for-5 in BC races).

“This is the pinnacle (of my career),’’ a delighted Catalano said of his fourth BC victory. “We’ve been light on horses. We got lucky in this one. We just got the nod.”

“I knew there was a lot of speed in the race, and I had none, so I knew I was going to come from the back,’’ said Ortiz. “He was giving me a great run, but I didn’t know if I was going to get there. Finally, we did. He put his head right on the wire. I was about 60% t sure I won.”

Life Is Good, indeed. The front-running 3-year-old was quickest out of the starting gate and easily shrugged off a challenge from Ginobili and won by 5 ¾ lengths.

Transferred to trainer Todd Pletcher from Bob Baffert’s barn in June, Life is Good – with Irad Ortiz, Jr. up — has continued to excel. A son of Into Mischief, Life Is Good has won two of three for Pletcher, and upped his career record to 6-5-1-0 for WinStar Farm and CHC Inc.

Life Is Good, an early Kentucky Derby favorite before being sidelined with a slight injury, returned $3.40 as the 3-5 favorite in an eight-horse field, which included Met Mile (G1) winner Silver State, who stumbled at the start and finished fifth.

“I had a perfect trip. He broke out of there running, he relaxed for me,’’ said winning rider Irad Ortiz, Jr. “I wasn’t worried about those other runners early in the race because I knew he was so fast. When we got to the quarter pole, he re-broke for me. What a nice horse to ride.” 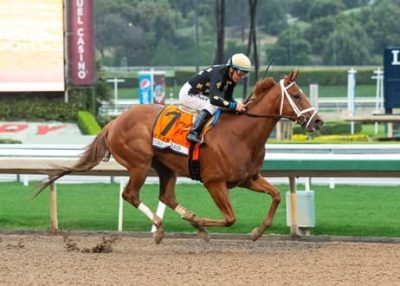 It was not to be for Gamine on this day. Trainer Bob Baffert’s champion filly looking to repeat in this one was upset by 6-1 shot Ce Ce for breeder/owner Bo Hirsch, the son of Del Mar founder Clement L. Hirsch.

Gamine, 2020’s 3-year-old female sprint champ, was sent off as the 2-5 favorite in a five-horse field. With John Velazquez aboard, Gamine shot to the lead but was pressed by Bella Sofia most of the way around.

On the turn for home, Edgeway loomed up on the inside and Bella Sofia on the outside, but it was Ce Ce, with Victor Espinoza aboard, who came rolling to the lead from the outside and won by 2 ½ lengths over Edgeway.

“Around the turn she put in her run, and she was very good,’’ said McCarthy after the second BC win of his career. “It’s a proud moment for (Bo Hirsch and I). … She’s been very consistent. I think last year I decided that this year we would go one turn with her. She’s been touting herself this week that she was going to run a big one. I’m just glad she did on a stage like today.”

Baffert was clearly disappointed with result.

“She was out there, and she just got tired at the end. The winner ran a great race. I really can’t make a lot of excuses. She just got tired,’’ he said. “I blame myself with the preparation. She had some time off and I think a race in between probably would have helped her. I think I made a mistake there.”