The Farrell Report: Maxfield Set For Stephen Foster At Churchill; Fans Should Flock To Saratoga

The Triple Crown compellingly dominates the racing world for five dramatic weeks in late Spring, shunting the other divisions temporarily to the background.

The trio of classics for 3-year-olds are the sport’s most important races, and rightfully command the lion’s share of attention. With the Triple Crown now in our collective rear-view mirrors, we can again focus on the sport’s veteran stars, starting with the Saturday card at Churchill Downs.

Closing day of the meet features a pair of Grade 2 stakes that are Breeders’ Cup “Win and You’re In” qualifiers: the Stephen Foster and the Fleur de Lis. Both races will likely attract small fields dominated by heavily bet favorites. 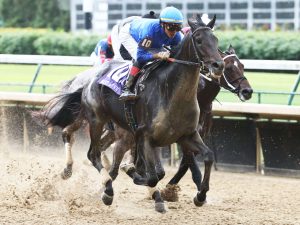 The mighty Maxfield looks to build on an already successful 2021 campaign with dominant victories in the Mineshaft (G3) and the Alysheba (G2) Stakes.

The 4-year-old Godolphin homebred trained by Brendan Walsh is 6-for-7 lifetime, and a perfect 3-for-3 at Churchill Downs.

The lone blemish on his sparkling record was a third-place finish in the Santa Anita Handicap (G1) in early March. He rebounded nicely from that defeat to take the Alysheba on the Kentucky Oaks (G1) undercard.

“I think the timing of this race works out well for us because it’s the same timing following his race in the Santa Anita Handicap,” Walsh said. “We know he loves it here at Churchill and I think with age and time he can keep improving.”

If Maxfield gets much better, he’ll be downright scary. He is only beginning to scratch the surface of his talent.

Injuries have slowed his progress, costing him a shot at last year’s Triple Crown. Barring the unexpected Saturday, the 4-year-old will punch his ticket to the Breeders’ Cup Classic (G1).

His expected rivals in the Foster include Chess Chief, Silver Dust, and Warrior’s Charge.

Envoutante is similarly well positioned in the Fleur de Lis where the winner secures a spot in the Breeders’ Cup Distaff (G1).

The “other” 4-year-old filly in the Ken McPeek barn has thus far been eclipsed by Swiss Skydiver.

Also expected to run is the formidable Letruska, winner of the Apple Blossom (G1) and the Ogden Phipps (G1) in her two previous starts.

Envoutante has her chance to shine if she can handle Letruska, along with other probables Point of Honor, Spice Is Nice, Miss Bigly and Dreamalildreamofu.

Racing fans got welcome news last week that Saratoga will be wide-open for the meet that kicks off July 15.

There were fears earlier in the year that Saratoga would run with no-to-limited fan access.

Fear not … get ready for that annual dash to secure your favorite spot in the picnic area behind the grandstand.

For information, check in at NYRA.com/Saratoga.

With 70% of adult New Yorkers now vaccinated against COVID-19, Gov. Andrew M. Cuomo recently announced the immediate removal of COVID-19 protocols and restrictions for nearly all activities and industries, including outdoor sports and entertainment venues.

As a result, Saratoga will be humming at 100% capacity. It’s another positive step on the road back to life as we knew it.

Developers take that advice to heart, always on the prowl for attractive parcels. Unfortunately, some of the most desirable acreage has a racetrack sitting on it.

The list is long of prominent tracks that fell to wrecking balls, like Hollywood Park, Bay Meadows, Sportsman’s Park, Garden State Park, Roosevelt Raceway and Liberty Bell Park to name only a few.

We could soon be adding Arlington International to the list of dearly departed.

Churchill Downs earlier announced its intention to sell the property for non-racing development. The Chicago Bears are interested in building a new stadium there to replace Soldier Field.

The Bears, in a statement last week, said they have submitted a bid to “further evaluate the property and its potential.”

That “potential” presumably does not include horse racing.

As if that wasn’t bad enough, “Bloomberg News” reported last week that The Stronach Group was fielding interest in unspecified assets.

The message here is clear. If you’re planning a day at the races, do it, and do it soon while you still have a racetrack in your vicinity.