He’s a workaholic perfectionist, a family guy who doesn’t drink but whose horsemanship inspires countless champagne toasts. The unfailingly polite Irishman looks and acts like Clark Kent but trains like Superman.

For Aidan O’Brien, it’s all about the horses and relentless attention to detail. The 51-year-old master of Ballydoyle Stable in County Tipperary has been the world’s No. 1 trainer since the start of the millennium, and his list of graded-stakes triumphs (361 at last count) would fill a small book. 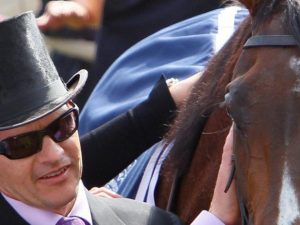 How amazing is he? On July 4, O’Brien won his record eighth Epsom Derby with front-runner Serpentine, a 25-1 shot who was dismissed as a pacemaker for his five stablemates. Surprise! The son of Galileo’s margin was 5 1/2 lengths under Emmet McNamara, who had ridden only eight times this year and was winless since October. Only O’Brien could have pulled that off in one of the world’s most prestigious races.

His reaction, delivered in a quiet monotone, was typical.

“I’m absolutely delighted for Emmet,” O’Brien said. “He gave him an incredible ride, so I’m over the moon. We’re always delighted if one of them wins.”

That’s happened 12 times for O’Brien at the Breeders’ Cup, where he’s had 147 runners and collected six trophies from the Turf, four from the Juvenile Turf and one each from the Juvenile and Marathon. Remarkably, he’s been shut out the past two years at Churchill Downs (0-for-14) and Santa Anita (0-for-8), although his son Joseph, a former star jockey, trained Iridessa, upset winner of last year’s Filly & Mare Turf. Like Galileo and so many of his other champions, Aidan also is a world-class sire.

The great man pre-entered 10 horses in six races, all on the grass, Wednesday morning for championship weekend Nov. 6-7 at picturesque Keeneland in Lexington, Kentucky.

Magical is O’Brien’s best chance. The 5-year-old daughter of Galileo is an 11-time stakes winner, with 12 victories and seven seconds in 26 starts, and her best race may have come in a defeat. She ran second, beaten three-quarters of a length, to two-time Arc de Triomphe heroine Enable in the 2018 Turf at Churchill. Magical was 10-1 that day; her price this time will be one quarter of that, maybe less.

The plan was to retire Magical after last season, but she did so well over the winter that O’Brien and the Coolmore ownership group decided to bring her back. Good move, because she added three Group 1 wins to a dazzling resume.

“We’ve been delighted with her this year,” O’Brien said Wednesday. “She’s a fine, big mare and she’s been racing at the top level at 3, 4 and 5.”

The 3-year-old colt Mogul comes off a 2 1/2-length romp in the 1 1/2-mile, Group 1 Grand Prix de Paris at Longchamp on Sept. 13. Like Magical, he was being pointed for the Arc there on Oct. 5 but O’Brien scratched them because of extremely soft ground.

“Mogul has had a big year, and his last run was his most impressive,” O’Brien said. “He quickens well and he’s come out of that race very well. He’ll like the fast ground at Keeneland, and a flat track will suit him.”

In 2015, the only other time Keeneland hosted the Cup, O’Brien’s 3-year-old filly Found knocked off odds-on Arc champion Golden Horn in the 1 1/2-mile Turf. Her son, Battleground, is worth a long look in the Juvenile Turf. He’s 2-for-3 after taking his last two races at 7 furlongs by a combined 4 1/2 lengths.

“He likes fast ground,” O’Brien said, “and he’ll be stepping up to a mile for the first time.”

They sound like three live horses, so forget that 0-for-22. Expect a major bounce-back from the Irish wizard.