The race is named for a mythical fountain of youth Spanish explorer Ponce de Leon set out to find in the 1500s. What’s found today in the general area of south Florida is the $400,000 Fountain of Youth Stakes (G2), a prestigious event for 3-year-olds with hopes of running in the Kentucky Derby (G1).

With Derby qualifying point of 50-20-10-5 to the first four finishers, the winner and likely the runner-up would all but clinch berths in the Run for the Roses at Churchill Downs on May 7.

A field of 13 was entered. Simplification was 7-2 on the morning-line. Mo Donegal was entered and made the 3-1 favorite but spiked a mild fever and will not run. 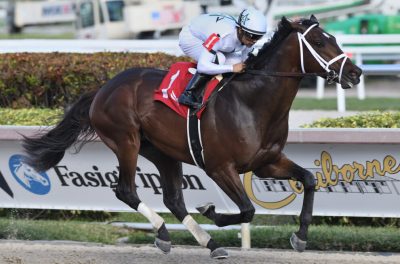 Some other famous names found on the winner’s list include In Reality, Al Hattab, Shecky Greene, Darn That Alarm, Vicar, Songandaprayer, Mohaymen, and Gunnevera.

In 2019, Hall of Fame jockey John Velazquez was aboard Code of Honor to pick up his fifth career Fountain of Youth win and take a one-race lead in FOY victories over fellow Hall of Famer Jerry Bailey. He also rode Scat Daddy (2007), Quality Road (2009), Eskendereya (2010) and Orb (2013).

Saturday’s weather is expected to be warm and pleasant, with partly cloudy skies and highs in the low 80s. Expect fast and firm conditions. A total of 13 races have been carded of which nine are stakes and eight graded. The Fountain of Youth is the 12th race post time of 5:42 p.m. ET.

The Fountain of Youth field in post-position order, with jockeys, trainers, and odds.

Not This Time—Simply Confection, by Candy Ride (Arg)

Not This Time—Werewolf, by Arch

Not This Time—Sweet Sweet Annie, by Curlin

Giant’s Causeway—Game for More, by More Than Ready