The first odds-on favorite in 28 years, and on paper, the 3-5 Tiz the Law is the only horse worth taking seriously. Rarely in the history of the world’s most famous race have so many been given so little chance to defeat one.

COVID-19 pushed back the 146th Kentucky Derby four months and will turn Churchill Downs into a ghost town on Saturday. But, optimists thought, at least The New Abnormal would allow more 3-year-olds to come into their own by late summer, creating a deeper, more competitive field.

Incorrect. We lost two stars, Bob Baffert’s Nadal and Charlatan, and instead have a consensus one-horse race. 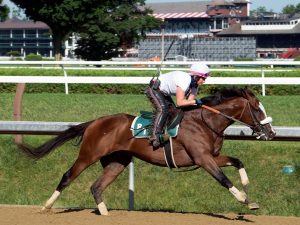 Picking against Tiz the Law takes you out of the realm of logic and into the Neverland of Hope Bets. And you know what happens to nearly all those tickets.

Yes, in 1992 odds-on Arazi finished eighth, and maybe there’s another Lil E. Tee out there to thrill stabbers. I wish I could make a case for one, but I just can’t. I hate picking 3-5 shots, and I did cash on Lil E. Tee because I questioned whether France’s Arazi was an equine Napoleon.

This time, like almost everybody else, I’m putting Tiz the Law on top, with 30-1 Max Player for second and 8-1 Authentic in third. I’ll explain.

Although Tiz the Law got post 17, which never has produced a Derby winner, he did all right with the draw. Just outside him is Authentic, whom John Velazquez will send immediately for the lead.

From 15, Ny Traffic also will be gunned from the gate. Tiz the Law’s sharp young jockey, Manny Franco will be able to play the break, watch the pace develop and react accordingly. Distance will be no problem, because Tiz the Law proved he can excel at 1¼ miles in his Travers runaway.

Moss: “Watching Tiz the Law win the Travers was reminiscent of one of American Pharoah’s best races. I think he’s a very special horse.”

Bailey: “He looks invincible, even though no horse is. His running style makes it so easy for him and his rider.”

The main concern for Tiz the Law was that he would draw post 1, 2 or 3, because he dislikes running inside horses. From 17, that scenario won’t happen.

“I like being on the outside,” his trainer, Barclay Tagg, said. “It gives you a chance, if you have any speed at all, to get a better position.”

A thoroughbred’s best weapons are tactical speed and quick acceleration, and Tiz the Law displayed both while sweeping the Holy Bull, Florida Derby, Belmont Stakes and Travers by a total of 16½ lengths. The New York-bred son of hot sire Constitution blew away those fields without being asked to extend himself.

Tiz the Law’s only loss in seven starts came last fall at Churchill, so some may say he dislikes the quirky track that brought down superstars Easy Goer, Holy Bull and Skip Away. There were legitimate excuses for Tiz the Law’s third-place finish Nov. 30 in the 1 1/16-mile Kentucky Jockey Club Stakes. It was run on a sloppy track in a driving rain, it was his first time around two turns, and he was pocketed along the rail much of the way. He still fell short by only three-quarters of a length.

“He’s a different horse now,” Franco said. “He’s very mature, he’s improving race by race, and I’m very happy with the way he’s doing it. His mind is growing and he’s doing everything the right way. He’s ready for whatever happens.”

The big loser in the draw appears to be stalker Honor A.P., a 5-1 shot in post 16. The Santa Anita Derby winner’s best chance would be to save ground just behind the first flight. From post 16, it’s hard to imagine Mike Smith working out that kind of trip. Honor A.P. isn’t fast enough to make the early lead, and if he’s hung wide into the first turn, he’ll pay for it later on. He’s also never been farther out than post 6 or won from farther back than fifth. (Full disclosure: I have a small future bet on Honor A.P., whom I considered picking to win before he drew poorly.)

I anticipate a fast pace, which could set up closer Max Player, a 30-1 shot in post 2 who can save ground under Ricardo Santana, Jr. Max Player, a grinder who’s 5-for-5 lifetime in the money, has been training well at Churchill since being transferred from Linda Rice to Steve Asmussen. He ran a respectable third in the Belmont and Travers, and neither runner-up from those races, Dr Post and Caracaro, is in the Derby. Besides Max Player, my pick for second, I’ll throw another deep closer, Enforceable (30-1, post 3), underneath Tiz the Law in an exacta.

Authentic is erratic but very fast, and it’s madness to dismiss a quality front-runner trained by five-time Derby champion Baffert and ridden by two-time winner Velazquez. I expect Authentic will tire in mid-stretch and fade to third.

If somebody beats Tiz the Law, I won’t be kicking myself for missing something in the past performances. He has to regress significantly while another horse runs the race of his life. Possible, but unlikely.

“I keep pinching myself because he’s such a unique horse,” Tagg said. “Everything we’ve asked him to do, he just does it. You think he’s gotten in trouble here, in trouble there, and the next thing you know, he’s in front. He’s a pretty amazing horse. I don’t know if I’ve seen a horse like him.”