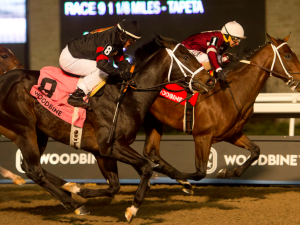 There’s no place like New Orleans, a must for any bucket list, especially if you like to gamble. Action is never hard to find in The Big Easy, whether it’s cards, roulette or the horses.

A short cab ride from the deliciously seedy French Quarter is the Fair Grounds, Louisiana’s flagship racetrack. They’ve been running there since 1872, and it features big fields and prices often more generous than they should be.

In recent years the Fair Grounds’ Triple Crown preps have been productive. Kentucky Derby “winner” Country House and Preakness champion War of Will competed there last year, as did Kentucky Oaks winner Serengeti Empress. Maybe a future classic winner or two is spending this winter way down yonder in New Orleans.

The horse to beat is Mr. Misunderstood, who may have lost a step at age 6 (1-for-5 last year) but is a win machine on grass (12-for-21) and loves the Fair Grounds (3-for-5). He’s good enough to have been invited to the Pegasus World Cup Turf, so he holds a big class edge. Post 14 could be a problem, but turf master Florent Geroux can work out a trip.

I can’t leave Mr. Misunderstood (14) out of the pick 3, but I landed on four opponents who might give the favorite trouble. Strong closer Tone Broke (1) won a grass stakes in Canada, and Factor This (11) could sit on a nice stalking trip. Don’t Blame Rocket (4) is on the upswing, and Temple (8) likes the distance and will move up if there’s moisture in the course. (There’s a chance of showers Friday and Saturday.)

I whittled it down to three — two-time stakes winner Finite (6), Portrait (7) and His Glory (4). Finite could become Steve Asmussen’s best Oaks candidate, and she’s a deserving favorite. But taking a short price on a filly making her 3-year-old debut often backfires, and the other two could give her a fight.

I blame the sloppy track for His Glory’s sixth-place dud behind Finite last Nov. 30 in the Golden Rod at Churchill. I’m tossing it out, and Fair Grounds king Tom Amoss may have her primed to run big off the layoff. Portrait is training well for Brad Cox, and she has the look of a filly who could make a big move forward.

Just about anyone in this lightly raced field of 14 could jump up with a career top, so I may regret going with only two. I settled on likely favorite Scabbard, who has faced the best opponents, and Halo Again, who looks like an overlay with a future for Asmussen.

Scabbard (4) ran second to two promising colts — eventual Breeders’ Cup Juvenile favorite Denis’ Moment and stakes-winner Green Light Go. He has the best figures and a solid finishing kick. Halo Again (7) dominated his debut by four lengths at 7 furlongs at Churchill Downs, then made a two-move rally to take a 1 1/8-mile stakes on Woodbine’s synthetic surface. Two-year-olds who can run like that in their first two races and win at 9 furlongs are rare.