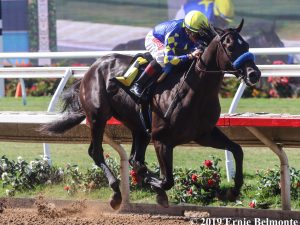 Many have raced only once or twice, so there isn’t a lot of form to go on. Dealing with so many young horses who are “unexposed,” as they say in Europe, makes it more of a handicapping challenge. Often the obvious favorites finish 1-2-3, but if you can find a long shot who’s ready to make a big move forward, it can be glorious. Even if it only finishes second to the chalk, the exacta can make your day.

I made a nice hit in the 2017 Juvenile Turf at Del Mar, when 12-1 shot Untamed Domain rallied to miss by a length against Aidan O’Brien’s Mendelssohn. The exacta combining the horse with the best late-pace figure and the 9-2 favorite from the world’s leading trainer paid $146.60. Don’t be surprised if a similar scenario plays out Friday at Santa Anita.

My usual M.O. for the Breeders’ Cup is to scan the past performances of the pre-entries to identify the top choices, the possible contenders and the no-hopers. After Monday’s post-position draw at 6:30 p.m. ET, I’ll give you a detailed analysis and 1-2-3 picks.

Consider this a final breeze:

Will it be a repeat of last year, when Bulletin led throughout on a wet course at Churchill Downs? Or will a closer capitalize on what should be a hot, contested pace?

America’s 2-year-old king, trainer Wesley Ward, pre-entered four, with the versatile Kimari looking like his best chance. He missed by a head after setting the pace in a 25-horse field at Royal Ascot, and then overcame a slow start by circling the field to win a Keeneland stakes. Ward’s Cambria and Freewheeler also shape up as major players. Also give a look to Chimney Rock, a close second to Kimari and Cambria, and Bulletproof One, a course and distance winner in his only grass start.

Royal Ascot winner A’Ali and Al Raya look like the top Euros, who may not handle what should be very firm ground.

An outside post in the short run to the first turn could be too much to overcome, so the draw will be key.

The Europeans have won nine of 12 runnings, including three of the last four, with Aidan O’Brien taking four. His best shot appears to be Royal Ascot winner Arizona, coming off a strong second to undefeated Pinatubo, Europe’s top 2-year-old. Peace Achieved, Decorated Invader and deep closer Vitalogy have the best credentials among the Americans.

Surprisingly, Bob Baffert has won this race only twice, and not since 2007. He’ll have the likely heavy favorite in two-time stakes winner Bast, but she’s no lock, considering she beat Doug O’Neill’s Comical by only a head last time. Brad Cox’s British Idiom dominated Keeneland’s Alcibiades by 6½ lengths after stalking early and could benefit from likely hot fractions. Perfect Alibi, Lazy Daisy and Wicked Whisper also are in the mix.

This is Chad Brown’s race, with five victories in 11 runnings, including four of the last five. He has two in, but neither maiden winner Princess Caroline nor Grade 2 winner Selflessly reminds anyone of Newspaperofrecord or Lady Eli. Alms, Crystalle and Sweet Melania have better resumes than Brown’s pair, as does England’s Daahyeh, the top-ranked European.

Eight Rings, who crushed his Grade 1 prep at Santa Anita by six lengths, will be expected to give Baffert his fifth Juvenile trophy. Temperament, not talent, could be this Empire Maker colt’s undoing. After breaking his maiden by six, he ducked in, was bumped and threw Drayden Van Dyke leaving the gate as the 1-2 favorite.

Eight Rings’ biggest challengers are Kentucky-based colts Dennis’ Moment and Maxfield. Dennis’ Moment coasted in Churchill Downs’ Iroquois Stakes, and the 2-for-2 Maxfield overcame a bad start with a stunning move, circling the field on the turn to take Keeneland’s Breeders’ Futurity by 5½. Maxfield also had a poor break in his first race, and Dennis’ Moment lost his rider in his debut, so all three standouts come with caveats.