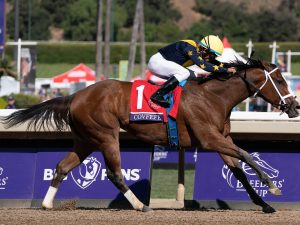 The late money poured in on Covfefe, and it was the smart money.

The freakishly talented 3-year-old broke well from the rail and stalked in third before blowing open the 7-furlong $1 million Filly and Mare Sprint (G1) at the top of the stretch. She drew clear in mid-stretch under Joel Rosario and held off fast-closing Bellafina by three-quarters of a length Saturday at Santa Anita.

Covfefe, the 3-2 favorite, was bet down from 2-1 in the final two flashes. She earned her third consecutive victory and sixth in eight career starts after running 7 furlongs on a fast, speed-favoring track in 1:22.40.

New York shipper Come Dancing, who was favored through most of the betting, never got into contention and finished far back.

It was the second Breeders’ Cup victory of the weekend for Kentucky-based trainer Brad Cox, who took the Juvenile Fillies with British Idiom on Friday. Rosario also took the previous race, the Grade 2 Twilight Derby, on the turf with long shot Mo Forza.