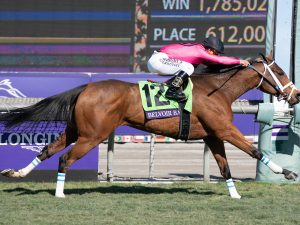 Not only did the Santa Anita-based trainer win the race for the third consecutive year, but he saddled the first two finishers, long shots Belvoir Bay, the 6-year-old mare who led throughout, and 7-year-old Om, who finished 1 1/4 lengths behind his stablemate and a nose ahead of Shekky Shebaz.

Miller won the Turf Sprint the previous two years with Stormy Liberal, who never got involved this time and finished eighth.

Belvoir Bay, who paid $31.60, broke well from post 12 on very firm turf that overwhelmingly favored early speed the past two days. She set a course record of 54.83 seconds in her first start since running fourth June 8 on the Belmont Stakes undercard. She had lost three in a row since winning a 5-furlong race Feb. 16 at Santa Anita. On March 30, she ran second in Dubai to Blue Point, one of Europe’s top sprinters.