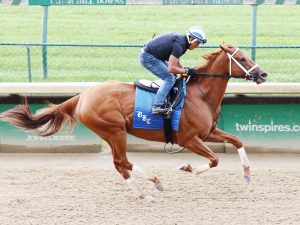 The stage is set for Monomoy Girl, the diva of the filly and mare division, to have her Hollywood ending with a victory in Saturday’s $2 million Breeders’ Cup Distaff (G1), but the new starlet on the scene, Swiss Skydiver, could steal the spotlight on Saturday.

Monomoy Girl won the 2018 Distaff and has already written the script for comeback story of the year. After winning this race two years ago she was sidelined with illness and injury for 18 months. Conventional wisdom was that she would never make it back to the races, and if by some miracle she were able to do so, she could never be the same.

But trainer Brad Cox not only brought her all the way back, he brings the 5-year-old mare into the Distaff as a now six-time Grade 1 winner undefeated in three 2020 starts, including the La Troienne Stakes in her last.

“She’s good, really good. She’s as good as she’s ever been honestly,’’ Cox said of his 2018 3-year-old champion filly. “It’s scary to see how well she’s moving, how happy she is and how fresh she is. We’ll see what the future holds for her, but as a 5-year-old she’s showing how mature she’s become.”

Swiss Skydiver has demonstrated maturity of her own throughout her 3-year-old season where she has danced every dance in nine starts and hasn’t had a break in a 11-race career that netted wins in the Preakness (G1) against the boys last time out and in the Alabama (G1) in August at Saratoga. In between, she was the runner-up in the Kentucky Oaks (G1), and four races back she was second against males in the Blue Grass (G2).

Now it’s time for an eagerly anticipated showdown in the Distaff, which will be contested by a field of 10 at 1 1/8 miles at Keeneland.

Monomoy Girl, who has faced 101 rivals in her 14-race career and finished in front of 100 of them, according to Daily Racing Form, will partner again with jockey Florent Geroux. He’s been aboard for her last 13 starts and they will break from the far outside post as the 8-5 morning-line favorite. Swiss Skydiver drew post 5 and is the 2-1 second choice under Robby Albarado, who rode her for the first time in the Preakness and gets the return call from trainer Kenny McPeek.

“I love my draw. I love being where I’m at. We have to beat them all. If they weren’t good, they wouldn’t be in the race, but I guess the main threat is Monomoy Girl on the outside,’’ Albarado said. “I just want to get away clean and get through the first turn to see where we’re at. Hopefully, I can get her tucked in the same as in the Preakness and tick off the 12s like she likes to do. Every eighth of mile, she’ll go in 12 (seconds) and comes home as fast as you want her.”

Undoubtedly Swiss Skydiver, who was named by owner Peter Callahan after his granddaughter, Callie, sent a video of herself skydiving over the Swiss Alps, has tactical speed and push-button acceleration to do whatever Albarado asks. But she is taking on older rivals for the first time and she may find Monomoy Girl grittier than the sophomore girls and boys.

“She’s a true champion,” Cox said about the stable star for the partnership of Michael Dubb, Sol Kumin’s Monomoy Stables, The Elkstone Group, and Bethlehem Stables. “What she’s accomplished the last 2 1/2 or three years is amazing. She gives us a lot of confidence every time.”

The connections of the Bill Mott-trained Horologist are feeling optimistic about their chances as well.

The 4-year-old New Jersey-bred was not Breeders’ Cup nominated as a foal and after she won the Beldame (G2) at Belmont Park last time out principal owner Cameron Beatty said she would not be supplemented to this race. But then he had a change of heart and ponied up the $160,000 in nomination and entry fees.

“Bill Mott was really pleased with how she came out of the Beldame,” said Beatty, who transferred her to Mott this year. “At the end of the day, we decided we had to give her this opportunity. She’s run really, really well since she’s been with Bill. He’s turned her around and made her into a really nice filly. We wanted to give her the opportunity to get some recognition and to run against the big girls.”

Horologist, who shares her name with one who makes or repairs watches, is the 8-1 third choice in the race and will be ridden by Junior Alvarado from post 4. She may not have a Grade 1 win on her resume, but she does have Mott calling the shots and he has a Distaff record five wins on his sheet.

Another who should receive considerable attention is Peter Brant’s Dunbar Road, installed at 12-1 and in post 3. She’s back for another try in the Distaff after finishing fifth under Jose Ortiz in the race last year at Santa Anita.

Dunbar Road was the third-place finisher in the Beldame, but trainer Chad Brown was using that as a Distaff prep as it was her first race back from successful throat surgery to fix an entrapped epiglottis discovered following her easy victory in the Delaware Handicap (G2) in July.

“She didn’t break that well last time (when third in the Beldame),” said Ortiz, who has been aboard for five of her six wins but had to hand off the reins to brother Irad Ortiz, Jr. when he had a positive COVID-19 test before the Delaware Handicap. “I think the last race looks kind of bad, but it was also a really heavy track. I know it’s a tough race with these two fillies Swiss Skydiver and Monomoy Girl, but she’s a very honest filly. Hopefully she he can get a good position and make her run.”