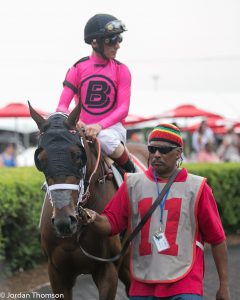 Wonder Gadot after winning the Prince of Wales Stakes (photo by Jordan Thomson).

In Shawshank Redemption, when warden Samuel Norton comes to inspect Andy Dufresne’s cell, he sees a picture of Rita Hayworth.  He doesn’t approve of it, but ends the scene by saying, “exceptions can be made.”

After romping to victory in the $400,000 Prince of Wales Stakes on July 24, the filly, Wonder Gadot sits just one win away from Triple Crown glory.  Before you get agitated, in this case it’s the Canadian Triple Crown.  To do this, she would have to win the 1 ½-mile Breeders Stakes on the turf at Woodbine.

Before the race, trainer Mark Casse said that the Prince of Wales was being used as a prep race for the Alabama Stakes (G1) at Saratoga.  This was the plan all along, but after winning, there was a “why not go for the Triple Crown” thought among some that cover the sport. Casse, ever the diplomat, said he would talk to the owner before making a final decision.

I argue that history and prestige is better than grabbing a bit more attention by winning a race at fabled Saratoga.  There have been 12 horses that have won the Canadian Triple Crown and, of course, 13 in the United States.  The title “Triple Crown Winner” lasts for eternity.

But, as Norton said, “exceptions can be made.”

After the Jim Dandy Stakes (G2), which was won by Tenfold, Wonder Gadot’s trainer said that, provided everything goes to plan, his filly wouldn’t be running in the Alabama, or the Breeders Stakes.  Instead, she would take on the boys in the Travers Stakes (G1) on Saturday, Aug. 25, at Saratoga Race Course.

The Travers just got very interesting.

Who doesn’t want to see the girl go up against the boys?  And don’t you want her to win, too?

When 2018 began, many labeled this 3-year-old crop as one of deepest and talented in recent memory.  They were wrong, of course, as this crop is lacking in both depth and quality.  Nothing against Justify, who waltzed to the Triple Crown, but he’s gone and, with many big races ahead, there needs to be a storyline going forward.

Wonder Gadot appears to be the real deal.  Sure, Monomoy Girl is the leader in the proverbial clubhouse.  If she wins out, she will surely be named top 3-year-old filly of the year, but Wonder Gadot just gave the sport a needed shot in the arm.

I’m not a doom-and-gloomer; horse racing is not going anywhere, but anytime it can grab a headline, why not grab it and celebrate?

Wonder Gadot is named after actress Gal Gadot, who played Wonder Woman in the 2017 movie by the same name.  That alone warrants a story on Travers Day doesn’t it? 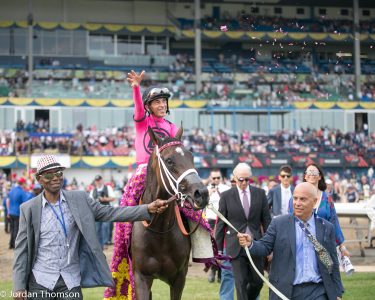 There’s another reason to like the Medaglia D’Oro filly — she runs.  She has already made eight starts in 2018 and, if she stays healthy, there are at least two more ahead with the Travers and the Breeders’ Cup Distaff.

After winning twice as a 2-year-old, Wonder Gadot was winless over her first six starts this year, but as spring became summer, she has found her stride, with dominant wins in the Queen’s Plate at 1 ¼ miles and the Prince of Wales at 1 3/16 miles.  The Plate was run on Tapeta; the Prince of Wales on a very sloppy dirt track at Fort Erie, which is east of Buffalo and referred to as the “Border Oval” by the locals.

Before that, Wonder Gadot finished second in two “Oaks” races.  In the Woodbine Oaks, Dixie Moon held her off in a stirring stretch drive and, in an even better stretch drive, she was edged out by Monomoy Girl in the Kentucky Oaks, arguably the most prestigious race for 3-year-old fillies.

Wonder Gadot seems to love the added distance.  Both Oaks races were run at 1 1/8 miles and, as she has stretched out, she seems to have that extra gear that allows her to put some distance between her and her rivals.  She won’t be intimidated by running against the boys and with a five-pound weight allowance, why not take them on in the Travers?

Casse, along with owner Gary Barber, wants to earn top filly honors.  In order for that to happen, she needs to beat Monomoy Girl and win another attention-grabbing race.  As prestigious as the Alabama is, without Monomoy Girl in it, it doesn’t really help her.

A win in the Travers, however, would set up a showdown in the Distaff with the “unbeatable” Monomoy Girl.  And the Travers is still one of the most important races for 3-year-olds; in fact, you can make the argument that only the Kentucky Derby has more prestige than the “Midsummer Derby” for sophomores.

If Wonder Gadot runs in the Travers, there will be some terrific angles at play.  She’s a filly; she’s running against the boys; is she really that good or are those Canadian-bred boys just mediocre horses? If she wins, the buildup to the Distaff will begin in earnest.

In addition, Wonder Gadot is Canadian and will have an entire country rooting for her on that summer Saturday in August.  Is this hyperbole on my part?  Of course, but having a little international flair certainly won’t hurt.

Canadians have added flair to the Travers before — like back in 1982, when Runaway Groom, at 13-1, scored one for the hockey-loving nation. All he did in that race was beat the Kentucky Derby winner, Gato del Sol, along with the Preakness winner Aloma’s Ruler and the Belmont winner Conquistador Cielo.

Like Wonder Gadot, Runaway Groom won two of the three Canadian Triple Crown races. After finishing second in the Queen’s Plate, he won the Prince of Wales and then grabbed national glory by taking down three American classic winners at the Spa.  Two weeks later, he won the third leg of Canada’s Triple Crown by capturing the Breeders Stakes.

I was hoping to see two Triple Crown winners in 2018, but I’ll make an exception regarding Wonder Gadot running in the Travers.  It adds intrigue, excitement and, hopefully, drama to a legendary race at the historic Saratoga track.  Moreover, it adds some spice to the sophomore division, which is suffering from ho-hum horses and the loss of a Triple Crown winner.

This is not a publicity stunt.  Casse knows better and he wouldn’t send his filly to a race that she would be overmatched in.  She isn’t there to grab headlines; she’s there to win and win she can.

There will be some good horses waiting for her.  Hofburg looked sharp in the Curlin; Good Magic breezed in the Haskell and, as long as Tenfold keeps his eyes on the track and not on the Jumbotron, he could be a factor as well.  Bravazo has competed well in the Derby, Preakness, Belmont and Haskell and you know, if he’s sound, D. Wayne Lukas will send him to the Travers.

But, for now, the filly is the story and because of her, this weekend will be very interesting.