If you are a horseracing fan and/or a horseplayer and you are not looking forward to the Travers (G1), it might be time to check your pulse, because the Mid-Summer Derby is shaping up as the premier handicapping and betting race of the summer season. The $1.25 million, 1 ¼-mile Travers Stakes for 3-year-olds will headline the best day of racing and wagering of the meet at Saratoga on Saturday, Aug. 25 — a day when The Spa will truly be place the center of the universe for all handicappers and horse racing aficionados, not just on-track, but all over the country.

But all eyes will be on the Travers, which this year is shaping up as a wide-open, brain-busting handicapping puzzle.

Less than a month after the announcement of the retirement of Triple Crown winner Justify, the Travers has managed to rebound in a big way by attracting just about every major 3-year-old still left standing — and emerging — at this point in the season. What is leaves us with will be a 10- or an 11-horse field overloaded with contenders and interesting storylines.

With Justify out of the mix, and Bill Mott’s up-and-coming stakes-winner Hofburg out of the race with a fever, Good Magic ascends to the role of “horse to beat” in the Travers, without a doubt. That doesn’t mean, however, that the race is a walkover. There are no less than seven or eight major contenders in the race with legit hopes of knocking-off Good Magic, and after all, they don’t call Saratoga the “Graveyard of Favorites” for nothing.

So if you are looking for some wagering alternatives to the favorite, where is the best place to begin your search?

The will be no shortage of options.

One extremely interesting contender is a filly. She is Wonder Gadot trained by Mark Casse. Wonder Gadot faces the boys after back-to-back victories over males Woodbine’s Queen’s Plate on turf and Fort Erie’s G1 Prince of Wales Stakes on dirt. Casse is confident enough about her chances in the Travers that he opted to bypass a shot at Canada’s Triple Crown in a race she would have been the heavy favorite to win. Wonder Gadot never runs a bad race and already owns a Grade 1 win at the Travers distance of 1 ¼ miles in her favor. Going against her, however, is the fact that suffered six straight defeats against fillies in her last six stateside outs.

A couple of Good Magic’s old rivals from the Triple Crown trail will be back to face him again in the Travers, with Preakness runner-up (ahead of Good Magic) Bravazo in the field, as well as Kentucky Derby ninth-place finisher and subsequent Belmont Stakes also-ran — and Jim Dandy (G2) disappointment — Vino Rosso. Of that pair, Bravazo has much more appeal, yet it feels like we’ve already seen the best of what Bravazo can do and, so far, it hasn’t been good enough.

Speaking of the Jim Dandy, which is the local Travers prep race, the horse to watch out of that race is the winner, Tenfold, trained by Steve Asmussen. Tenfold was third in the Preakness and fifth in the Belmont, but seems like a late-developing horse that is moving in the right direction at the right time and has the look of a serious contender.

Not only is there a filly storyline in the Travers with Wonder Gadot, there is also a turf-to-dirt storyline with Catholic Boy bypassing Grade 1 turf opportunities like the Secretariat in favor of a return to the main track. Catholic Boy has emerged as a top sophomore this summer with back-to-back wins in the Pennine Ridge (G3) and the Belmont Derby (G1). He was also an accomplished dirt horse before that with a victory in last fall’s Remsen (G2) and a troubled fourth in the BC Juvenile. Catholic Boy was switched to the grass after spring disappointments in the Sam F. Davis Stakes (G3) and the Florida Derby (G1), but now he is back with an enhanced resume and shouldn’t be overlooked. 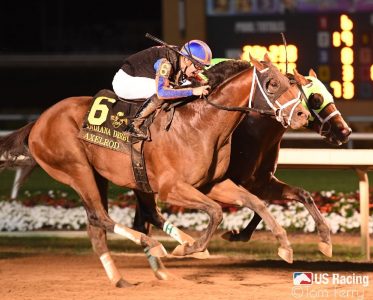 Axelrod gets up in time to win the Indiana Derby (G3) at Indiana Grand on Saturday (photo by Tom Ferry).

The remaining Travers serious contenders are or were European-based, but certainly no less dangerous. All eyes will be on Aidan O’Brien’s Mendelssohn, who was well-bet but got wiped out with a bad trip in the Kentucky Derby, but then, unfortunately, came back for an equally disappointing finish in the Dwyer Stakes (G3) at Belmont.  He’ll need to recapture his form when winning the UAE Derby this spring by 17 lengths in order to beat this field.

Gronkowski came from Europe to finish a promising second behind Justify in the Belmont, despite walking out of the gate and trailing the field by 10+ lengths much of the way. Gronkowski stayed stateside after the Belmont and will only improve after joining the barn of Chad Brown.  It’s a good thing the NFL preseason is in full swing, which should preclude namesake Rob Gronkowski from being at Saratoga for the race. That’s a good thing, because the NYRA wouldn’t want to risk him spiking the Travers trophy in the winner’s circle after Gronkowski wins.