The Churchill Downs spring meet wastes no time, with two of the most anticipated days of racing and wagering taking place right off the bat with Kentucky Oaks 2021 Day on Friday (April 30) followed by Kentucky Derby 2021 Day on Saturday (May 1).

The Grade 1 Oaks for 3-year-old fillies headlines a card containing six graded stakes, including the La Troienne (G1), Alysheba (G2), Eight Belles (G2), Edgewood (G2), and Twin Spires Turf Sprint (G2). The feature, of course, is the Oaks, which has drawn a full field of 14 horses. 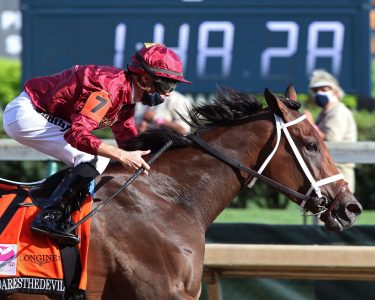 The Oaks is a wide-open handicapping puzzle with top horses coming from all parts of the country and several standouts in the field.

The morning line favorite is #10 Malathaat (5-2) trained by Todd Pletcher, based on her win last time out in the Ashland (G1) at Keeneland, where she defeated a pair of these same horses. Malathaat is now 4-for-4 in her career, which also includes a win in last fall’s Demoiselle (G2) at Aqueduct. John Velazquez will be aboard.

Among the top contenders include Brad Cox-trained #6 Travel Column (3-1), who won the Fair Grounds Oaks (G2) in her last race and who also won last fall’s Golden Rod (G2) at Churchill Downs with regular rider Florent Geroux, and #12 Search Results (3-1), who is 3-for-3 for trainer Chad Brown, including a win at this distance in Aqueduct’s Gazelle (G3). Irad Ortiz, Jr. is back aboard. The Beyer speed figures earned by both Travel Column’s and Search Results in their last races are better than any figure Malathaat has earned so far. Plus, both of those contenders have two preps under their belts this season; Malathaat has one.

Contention in the Oaks goes beyond the top three. There are also several legitimate contenders at better prices. For example, Malathaat at 5-2 on the morning line beat #5 Pass the Champagne (15-1) by a head in the Ashland and beat #14 Millefeuille (20-1) by less than a length in the Demoiselle. Jockey Joel Rosario, who rode Malathaat in the Ashland, is aboard Millefeuille in the Oaks for trainer Bill Mott. She is coming off a rebound second-place finish in the Gulfstream Oaks. Pass the Champagne, who will be ridden by Javier Castellano for trainer George Weaver, appears to be a legit up-and-comer who nearly held on to win the Ashland after overcoming a bad start.

The winner of the Gulfstream Oaks, #4 Crazy Beautiful (15-1) is also in the Oaks for Ken McPeek with Jose Ortiz aboard, as is Steve Asmussen’s winner of the Oaklawn’s Fantasy (G3), #1 Pauline’s Pearl (20-1), with Ricardo Santana, Jr. aboard.

The favorite is strong yet beatable, and the recommendation is go for a better price and some bigger tickets. Bet #12 Search Results to win and play four-horse boxes in the exactas and trifectas along with #5 Pass the Champagne, #6 Travel Column, and #14 Millefeuille. If you catch one or two of the better prices among that quartet, you could be sitting on a big winning ticket.

The graded stakes action on the undercard begins in race 6 with the $400,000 Alysheba (G2) for older horses going 1 1/16 miles, which features arguably the top attraction, #6 Maxfield (4-5). Maxfield, who was previously undefeated, exits a third-place finish last time on the Santa Anita Handicap (G1), but should successfully rebound in this spot against a field of five challengers, many of whom he’s already beaten. Maxfield is well worth a single in this race. He’s already 2-for-2 at Churchill Downs, and 4-for-4 at this distance.

Race 7 is the $300,000 Edgewood (G2) for 3-year-old fillies going 1 1/16 miles on the turf. While the favorite in the preceding Alysheba looks good at 4-5 odds, the favorite in the Edgewood, #6 Aunt Pearl, appears to be a little shaky. While there is no doubting her ability based on back-to-back wins last fall in the Jessamine (G2) and the Breeders’ Cup Juvenile Fillies Turf (G1), raising her record to 3-for-3, she has not yet been out this year and will now make her seasonal debut off nearly a six-month layoff. That makes her beatable at low odds as perhaps one or more of these young turf fillies have caught up to her in the interim. Two potential upsetters are #2 Gift List (7-2), an English invader who already got his prep race off a layoff, exiting a second-place finish in the Appalachian (G2), and #7 Zaajel (5-1), a stakes winner for Bill Mott who switches to the turf for the first time.

Friday’s undercard feature is next in race 8 with the running of the $500,000 La Troienne (G1) for fillies & mares 4 and up going 1 1/16 miles. This seven-horse field is headlined by last year’s Kentucky Oaks champion, #2 Shedaresthedevil (8-5), who is a six-time winner and 3-for-3 at Churchill Downs. She was victorious over Letruska in her seasonal debut last time out in Oaklawn’s Azeri (G2) and looks extremely tough to beat on this racetrack for trainer Brad Cox. Shedaresthedevil has early zip and a high cruising speed and will be tough to catch, but if you play the favorite, you will also want a chance to spice up your payoffs in the exactas and trifectas. The contenders with high upside that belong in your exotics are #4 Bajan Girl (10-1) and #6 Sanenus (10-1).

Race 9 is the $300,000 Eight Belles (G2) for 3-year-old fillies going 7 furlongs, and the favorite in this race, #10 Dayoutoftheoffice (3-1), makes her seasonal debut off a six-month layoff, which makes her beatable despite her multiple stakes wins and second-place finish in the BC Juvenile Fillies. Contention in this 12-horse field runs deep, and there are few if any toss-outs. If you can get the full 3-1 odds on Dayoutoftheoffice at post time, she still might be worth a bet as the favorite. Otherwise go for a price with #3 Souper Sensational (6-1), who shortens up from losses in longer races and seems to fit much better at 7 furlongs.

The last race on the undercard is race 10, the $250,000 Twin Spires Turf Sprint (G2) at 5 ½ furlongs on the grass. The horse to beat is the defending champion, #9 Diamond Oops (5-1), but this race could prove to be a coming out party for #3 Fiya (4-1), who comes in with a five-race winning streak, including turf sprints in the Maryland Million and the Claiming Crown.