After seven runner-up finishes in the Jockey Club Gold Cup (G1), including last year when his Vino Rosso was DQ’d from first to second, Hall of Fame shoo-in Todd Pletcher finally has that elusive victory.

“Not only had we not won it, we’d suffered some really close defeats and then throw in a disqualification on top of that and it’s been a frustrating one over the years,” Pletcher was saying after Happy Saver won the $250,000 JCGC at Belmont Park on Saturday. “This one was fun. It’s one of the races that has been hard on us. We’ve had some tough losses and it was very fulfilling to win it today.” 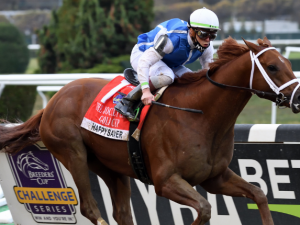 Pletcher, of course, has been among the leading trainers for year with a pair of Kentucky Derby (G1) wins, three Belmont Stakes (G1) victories, and a record seven Eclipse Awards as the nation’s top trainer. He’s the all-time leading money earning trainer with more than $395 million in purses. He becomes eligible for racing’s Hall of Fame in 2021, and it would be a stunner if he wasn’t voted in unanimously.

The JCGC winner’s club since its inception in 1919 includes some of the most famous horses in history, among them Man o’ War, Nashua, Forego, John Henry, Cigar, five-time winner Kelso, and Triple Crown winners Gallant Fox, Whirlaway, Citation, and Affirmed.

And it took a son of Pletcher’s first Derby winner – Super Saver in 2010 – to give the trainer an entry.

Despite the JCGC’s reduction in purse from $750,000 to $250,000 due to the cost measures taken by NYRA to help keeping racing going during the COVID-19 pandemic, the winner still earned a fees-paid entry into the $6 million Breeders’ Cup Classic at Keeneland on Nov. 7.

It’s been such an unpredictable year in the sport, and it seems fitting that 3-year-old Happy Saver – with a 4-0 record – began his career with a maiden win on June 20 at Belmont, and less than five months later he’ll have a chance to win one of the richest races in the world.

“That’s what we’re going to think about,” Pletcher said of the Classic, a race he won for the first time last year with Vino Rosso. “We’ll see how he bounces out of this and let him take us there when he wants to. Speaking to the Wertheimers [owners], they’re in no rush and they plan on racing him next year.”

Happy Saver was listed as a Preakness contender for a while after his win in the Federico Tesio Stakes at Laurel on Sept. 7, but the decision was made to skip the race and wait for the Jockey Club Gold Cup.

It paid off. Ridden by recently-returned Irad Ortiz, Jr. (COVID-19 quarantine), the 3-year-old Happy Saver ($6.70 for a $2 win bet) broke well from the rail, and stayed there. At first, the chestnut colt ran behind leader and 3-5 favorite Tacitus and Mystic Guide. As the small field of five turned for home, the rail was open and Happy Saver made his move and won by three-quarters of a length over Mystic Guide, with Tacitus third. 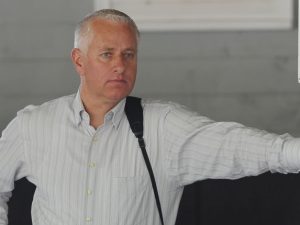 “He looks good,” Pletcher said Sunday. “He seemed to bounce out of everything well. He’s a little bit tired, which I would expect after running a race like that. It seems like he’s in good shape.”

We don’t even think Pletcher could have imagined that his lightly raced Happy Saver would rise to the top of his 3-year-old contingent and be on course to take on the likes of handicap division leaders Maximum Security, Improbable and Tom’s d’Etat as well as Kentucky Derby winner Authentic and Belmont and Travers winner Tiz the Law.

A recap of Saturday’s “Win and You’re In’’ the Breeders’ Cup races:

A big day for Joel Rosario kicked off with a 5 ½-length victory aboard 4-5 favorite Jackie’s Warrior ($3.70) in one of the top races for 2-year-olds.

The win clinched a fees-paid berth in the BC Juvenile (G1) at Keeneland on Nov. 6, and likely makes this colt trained by Hall of Famer Steve Asmussen the favorite.

Jackie’s Warrior – 4-for-4 — came into the Champagne off a victory in the Hopeful (G1) to close out the summer season at Saratoga. The son of Maclean’s Music pulled off another front-running win on Saturday, with Reinvestment Risk second in the six-horse field.

“The horse came out of the race in good shape and we’ll go from there,’’ Asmussen’s assistant Toby Sheets said. “He’s a spectacular individual.”

Dayoutoftheoffice ($7.80) stepped up in class and won the one-mile race for 2-year-old fillies by two lengths over favorite Vequist to claim a spot in the gate for the BC Juvenile Fillies (G1) at Keeneland on Nov. 6.

“She came out of the race good and ate everything up and looks good,’’ trainer and co-owner Timothy Hamm said Sunday. “She makes it seem easy. You get so many of these horses that whatever you try, it doesn’t seem to work. Then you get these good ones and it makes it seem like a real easy job.”

Ridden by Junior Alvarado, Dayoutoftheoffice outkicked Vequist, and the feeling is the filly is more than capable of getting the 1 1/16-mile distance of the Juvenile Fillies.

“Her demeanor is great. She’s very calm and very push-button,” Hamm said after winning his first Grade 1. “She’ll do whatever the rider asks her to in the mornings, so she’s easy to train. We always thought she wanted more ground. I have all the confidence she can handle the mile and a sixteenth. She’s trained like it and she acted like it.”

Civil Union ($8.10), with Rosario aboard, extended her winning streak to four with victory by a head over My Sister Nat in the 1 ¼-mile race for fillies and mares 3 and up over a firm turf.

Civil Union was well back in the field of seven, but Hall of Fame trainer Shug McGaughey was obviously fine with the outcome. 2-1 favorite Cambier Parc was fourth.

“I thought we’d break and have position, but we had an inside post and Joel elected to save ground and made a good move,’’ McGaughey said. “I was very pleased with her. She came out of the race just fine.”

Trainer Bill Mott couldn’t get a Grade 1 win out of Tacitus in the Jockey Club Gold Cup, but the Hall of Famer’s Harvey’s Lil Goil ($9.20) took the lead in the stretch and won the QE II Challenge Cup (G1) by three-quarters of a length over Micheline.

Ridden by Martin Garcia, the 3-year-old filly covered the 1 1/8 miles on a good turf course 1:48.72. Sweet Melania and Harvey’s Lil Goil hit the stretch together, but the winner pulled away, then held off favorite Magic Attitude and then Micheline. On Sept. 10, it was Micheline over Harvey’s Lil Goil by a neck in the Dueling Grounds Oaks at Kentucky Downs.

Five-year-old Mr Freeze ($5.20) seized the lead on the far turn and held off Aurelius Maximus by a neck for the win in the 1 1/8-mile race for 3-year-olds and up.

Trained by Dale Romans and ridden by Javier Castellano, Mr Freeze won in 1:50.71.

With the victory, the Phil Gleaves-trained Second of July earned an all-fees paid entry into the BC Juvenile Turf Sprint (G1) at Keeneland on Nov. 6.

Racing well off the pace under jockey Dylan Davis, Second of July took to the outside at the quarter pole, and made his way to the front inside the sixteenth pole and won by a half-length over After Five.

“I knew he was very fit and sharp and doing good, so I knew he would run his race, but I just wasn’t sure if it was going to be good enough, but it turned out to be,” Gleaves said. “I was happy to see he had so much horse coming around the turn and at that point I knew we were going to run well. He just wore them down. Dylan does such a great job. There would be no reason to change things at the Breeders’ Cup.”

Royal Approval ($3.10), the 1-2 favorite, overtook pacesetter Union Gables in the final furlong and won the 6-furlong race for 2-year-old fillies by three-quarters of a length under Irad Ortiz, Jr.

“I rode her like the best horse in the race,” Ortiz, Jr. said. “With this one I got the perfect trip. She broke well, she put me right there and when I asked her to go, she was there.”

Trainer Wesley Ward said winning the 113th edition of the Matron gave him confidence to go forward to the Breeders’ Cup, either in the BC Juvenile Turf Sprint (G1) against males or the Juvenile Fillies Turf (G1).

“We definitely will go to the Breeders’ Cup with her,’’ Ward said, adding he will discuss the options with the owners. “Just after talking to Irad, the mile [Juvenile Fillies Turf] might be the better option for her, but again, we’ll sit down and see how she is.”