On Tuesday, Oct. 12, 1920, the great Man o’War ran the final race of his career, defeating Sir Barton a race track in Canada. The Hall of Fame horse won 20 of 21 races, his only defeat coming against Upset in the Sanford Memorial at Saratoga on Aug. 13, 1919. Here’s the story leading up to that last race. 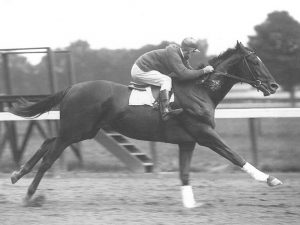 Man o’ War was in high spirits when he stepped onto Kenilworth Race Track to run his final race 100 years ago this week.

Promoters billed it as the Race of the Century. Certainly, the race held the attention of the sports world and beyond, for Man o’ War was to meet up with Canadian-owned Sir Barton, later recognized as the first Triple Crown champion.

Originally, Exterminator was to participate but the 1 ¼-mile distance of the race was considered too short for him. Another horse, Wickford, was entered but was scratched. This left Sir Barton and Man o’ War the only starters.

Man o’ War was a household name. He was a legend on hooves, an innocent in a sports world rocked to its foundations the previous year by a game-fixing scheme in the 1919 World Series. Unlike baseball players who conspired to lose the series, Man o’ War ran true to his nature, losing only one race in his two-year career of 21 starts. He was handsome, he was real, and he embodied the eager spirit of a nation emerging as a world power in these first years following World War I.

He had a worthy rival in Sir Barton, who the previous year had won the Kentucky Derby, Preakness and Belmont Stakes. (The series did not claim him until decades later when the three races were connected as the Triple Crown.)

The unlikely aspect to this race was the venue: the minor-league track known as Kenilworth Park, at Windsor, Ontario, on the Canadian side of the Detroit River. One person in Sir Barton’s entourage was disappointed at what he saw when first seeing Kenilworth: “A bleak and gloomy wilderness on the outskirts of the industrial city of Windsor.” But for that one Tuesday afternoon Oct. 12, 1920, Kenilworth would be the center of the universe. The reasons it was chosen for this race might seem odd to us in modern times, although back then they were not so much a stretch.

True, Canadian owner of Sir Barton, Commander J. K. L. Ross, wanted this race to take place in Canada. It’s also true that Abe Orpen of Toronto, one of four owners of Kenilworth Park, outbid numerous American tracks by adding an extra $25,000 to the proposed $50,000 purse. He also threw in a gold cup valued at $5,000. But much more figured in bringing this event to Kenilworth.

In two words: alcohol and gambling. Neither was possible (out in the open, at least) in 1920s Detroit. Both were possible across the river in Windsor. The Prohibition Era of the 1920s in Canada was legislated by individual provinces and not the federal government, as it was in the United States. Ontario, for example, prohibited the sale of alcohol but did not prohibit the importation of drink until 1921. Crafty Ontario residents consequently imported spirits by mail order from the neighboring province of Quebec during the time of the Man o’ War/Sir Barton race. It worked for everyone on both sides of the U. S./Canadian border, especially in October 1920 at Kenilworth Park.

Gambling was illegal in Detroit (and throughout Michigan) until 1933, so this was another reason Americans crossed the river to Kenilworth Park. You weren’t going to make much of a return if you bet Man o’ War in this race but that was beside the point: you still could bet.

The race promised to attract thousands of visitors to Windsor. A few days before the main event, 25,000 turned out to see Man o’ War work prior to the races one afternoon. Visitors filled the grandstand that actually was of American vintage: Orpen and his partners had dismantled the grandstand at a track in Buffalo, New York (also called Kenilworth) when building their Kenilworth in 1916. They reassembled the grandstand at Windsor, and a racetrack was born. It would remain open until 1935, two years after newly permitted gambling in Michigan created too much competition for the Windsor track to survive.

For the first time, with the Man o’ War/Sir Barton showdown, a race would be filmed in its entirety. Newspapers afforded large headlines and stories to the race. The owners of both horses arrived in their private railroad cars, the way the wealthy traveled in those times. Six official timers and three extra placing judges would work the race; each owner was to have a steward officiate along with the steward representing the track. The track had prepared two spectator boxes, one next to the other, across from the finish line for the respective owners. Dorothy Ours described these in her book, Man o’ War, as draped in black and yellow for Man o’ War’s owner (Sam Riddle) and orange and black for Sir Barton’s Commander Ross.

Man o’ War went postward the heavy favorite and beat the older Sir Barton with ridiculous ease. He ran his race essentially the only way a match race can be won: on the lead and widening at every call, hitting the wire seven lengths in front. A couple of days later his jockey, Clarence Kummer, revealed to the New York Herald that Man o’ War had won despite the jockey’s saddle malfunctioning: one of the stirrup webbings, or straps, had broken during the race.

“The accident reeked of sabotage,” Ours wrote in her book. The saddle was new and Kummer had used it only a couple of times, so the webbing could not have been worn out. “The tampering with Kummer’s saddle would become an often-forgotten footnote in Man o’ War’s career,” Ours wrote. If the saddle had in fact been tampered with, no one ever was identified with the crime.

Man o’ War had bruised a tendon in his right front leg during his final race, but was pronounced well and sound a few weeks later. Riddle, his owner, resisted suggestions that he race him in the Ascot Gold Cup, put him in movies or exhibit him at the Chicago World’s Fair. He received an invitation for Man o’ War to attend a dinner at the Waldorf-Astoria Hotel in New York, to arrive at the dinner by riding in the hotel’s freight elevator. He politely declined on Man o’ War’s behalf.

Instead, Riddle sent Man o’ War to Kentucky, where the great horse was foaled but never raced. He was to stand at stud, first at Hinata Farm and eventually, Faraway Farm, both near Lexington. His is a life worth remembering, this week during October, 100 years following his final race.