The harness racing circuit wraps up the Grand Circuit at the Red Mile in Lexington, Kentucky.

The highlight of the meet occurs Sunday, with the 128th Kentucky Futurity and the 55th Kentucky Filly Futurity for 3-year-old trotters.

A dozen colts are in the lineup for the $444,000 Futurity, including Hambletonian runner-up Ready For 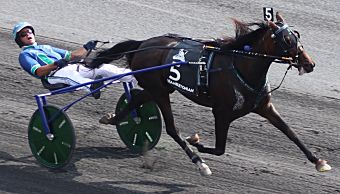 Hambo winner Ramona Hill will try to rebound off a recent loss when she heads the field for the $255,000 Futurity. The filly recently lost for the second time this year, beaten by Ab’sattitudexpress, also in the field Sunday. Also in the field is Hambo Oaks winner Sorella.

Like the Preakness (filly Swiss Skydiver), ladies have their day in Ohio

On the same day (Oct. 3) 3-year-old filly Swiss Skydiver beat the boys in the Preakness (G1) in Baltimore, a few pretty impressive mares were winning in Ohio, on Dayton Derby Day.

The 5-year-old mare Kissin In The Sand overtook tough-to-beat Shartin N (aka the Wonder from Down Under) and won the Dayton Distaff Derby for fillies and mares to rise in the ranks of female pacers.

In the Dayton Trotting Derby, rival 5-year-olds mares Atlanta and Manchego took on the boys, and Atlanta pulled away for driver Yannick Gringas to win in a track record 1:51. Atlanta has a tougher time defeating fillies and mares, but seems to excel against the boys.

“She can win from anywhere,” Gingras said. “I knew Manchego would take it out hard, so we sat back tonight and when it was time to go, she was so ready. (Trainer) Ron (Burke) always has her ready to go.”

In the Dayton Pacing Derby a field of nine was entered, and it was Bettor’s Wish winning for just the third time in eight races. Driven by Dexter Dunn, Bettor’s Wish was taken three wide and took charge in the stretch to win in 1:49.00

Derby Day was a good one for Dayton Raceway; the handle was just under $600,000, the second largest in the track’s seven-year history.

In last Saturday’s Grand Circuit races at the Red Mile, Tall Dark Stranger took the lead early and barely held off Captain Barbossa to win in 1:48.3 in one of the Bluegrass Series races.

The numbers are still good

Despite the pandemic, wagering at harness racing tracks continues to be strong. In 1,228 race days, $511,401,868 has been wagered; last year, in 1,640 race days, $496,916,965 was wagered. On the surface that’s good news, but the bad news is that most of the wagering has been off track through ADWs, which means less money to the racetracks. The hope is obvious — to keep the numbers up and to have live betting at all tracks in 2021.

Why not do some polling

With Election Day in less than 30 days, why not take a look at the top horses in the weekly Standardbred Poll as voted on by members of the United States Harness Writers Association.

I’m sure Atlanta will move up and if she would just race only against the boys … she’d be No. 1.