No doubt that most thoroughbred racetrack officials on the hot seat this weekend have done the right thing by canceling Saturday’s races due to extreme heat forecast to top 100 degrees, with heat indexes that could reach 110 degrees.

At Saratoga Race Course in upstate New York, the New York Racing Association canceled its entire Saturday card – the first time in 13 years NYRA has done so at the Spa because of the heat. 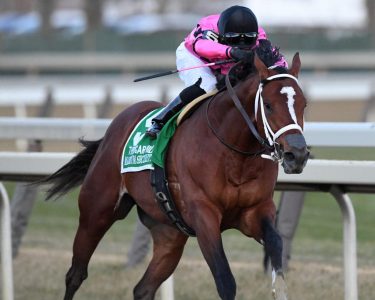 One track, though, Monmouth Park in Oceanport, New Jersey, is still running – for now. Why? The $1 million TVG.com Haskell Invitational, the track’s centerpiece race, is Saturday. The race features disqualified Kentucky Derby winner Maximum Security taking on six rivals, and four other graded stakes – the Molly Pitcher and Monmouth Cup (G2s) and the Oceanport and WinStar Matchmaker (G3s).

We’re sure the owners will spare no expense to provide extra safety measures, but hot weather is hot weather, even near the Jersey Shore. Temperatures in the high 90s are being forecast for the area, and with a crowd of about 30,000, and with horses crowded into the paddock, there should be much cause for concern, not to mention the horses running at high speed in sweltering heat.

“Our priority will be the safety of the horses, jockeys and our fans,’’ said Dennis Drazin, CEO and Chairman of Darby Development LLC., which operates Monmouth Park. “We will be in contact with the state veterinarians, and if we feel it’s unsafe for horses there are things we can do.’’

The heat wave affecting so many tracks comes just after the death of 30 horses either in training or during races at the recently ended Santa Anita Park meet. The uproar it has caused has racing officials trying to institute as many safety protocols as they can.

“Assessing the safety of racing conditions, including weather, racing surfaces and race day scrutiny, is of the utmost importance to NYRA and our industry partners,’’ said NYRA CEO and President David O’Rourke, who added the decision to cancel Saturday was reached after meeting with the New York Thoroughbred Horsemen’s Association and on the recommendation of Dr. Scott Palmer, equine medical director for the New York State Gaming Commission.

The Spa’s canceled card is set to be contested on Sunday, topped by the $500,000 Coaching Club American Oaks (G1) for 3-year-old fillies. There will be 13 races on the card.

Guarana, owned by Three Chimneys Farm, heads the five-horse field as she seeks her third straight win for trainer Chad Brown. The daughter of Ghostzapper won her first race by 14 ¾ lengths at Keeneland and stepped up and won the Acorn (G1) by six lengths at Belmont Park.

Peter Brant and Stud Vendaval’s Wow Cat is the headliner in a field of eight. Trained by Brown, Wow Cat won the 2018 Beldame Invitational at Belmont. The 5-year-old mare is making her seasonal debut after rallying for second in the Breeders’ Cup Distaff on Nov. 3. Stonestreet Stables’ Electric Forest, also trained by Brown, is cross-entered in the Molly Pitcher at Monmouth.

Also is the field is 4-year-old She’s a Julie, winner of the Bayakoa at Oaklawn Park (G3) and La Troienne (G1) at Churchill Downs for trainer Steve Asmussen. In her last start, she ran third in the Fleur de Lis (G2).

At Del Mar, the races go on Saturday. One to watch is the $200,000 San Diego Handicap (G2), featuring the return of Catalina Cruiser – ready to go again after rallying to win the True North Stakes (G2) at Belmont on June 7.

A year ago, Hronis Racing’s Catalina Cruiser made his stakes debut by winning the 1 1/16th-mile San Diego. Carrying highweight of 123 pounds this time, the 5-year-old son of Union Rags takes on five rivals as the 1-2 morning-line favorite. Joel Rosario rides and leaves from the rail.

Catalina Cruiser won his first four starts last year before the streak ended in the Breeders’ Cup Dirt Mile (G1), when he veered at the start and eventually faded to sixth as the 4-5 favorite.