With most tracks closed due to heat, white hot spotlight is on Monmouth Park

To race, or not to race, that is the question facing Monmouth Park

Whether ’tis nobler in the mind to cancel Haskell Day

Or suffer the potential slings and arrows of outrageous fortune.

But that, in a nutshell, is the challenge for Monmouth.

There is a punishing heatwave underway and every other track in the Northeast has taken shelter on Saturday by canceling. Even mighty Saratoga.

Only Monmouth is determined to soldier on. Everything remained in “go mode” as of Friday morning.

The track has taken precautions to counter temperatures expected to soar into the 90s. There are already misters in place to lower the heat in the saddling paddock. Water hoses and ample ice are available along the horse paths.

Post parades will be shortened, and the start times potentially delayed to avoid the worst of the noonday sun.

If you need so many precautions, why not call off the card like every other track in the region?

It’s not easy to do when it is your biggest day of the year, and your only shot at network TV. NBC will broadcast live from 5 to 6 p.m. ET.

So on they go, hoping for a bit of relief in the form of ocean breezes from the nearby Atlantic.

How the blistering heat impacts the $1 million TVG.com Haskell Invitational remains to be seen.

“Unfortunately, I’ve heard it’s going to be a little toasty that day,” said Hall of Fame trainer Bob Baffert, who sends out 2-1 second choice Mucho Gusto. “We’ll see how he handles that.”

The colt is already settled into the Kelly Breen barn under the care of Jimmy Barnes, Baffert’s chief lieutenant.

It wouldn’t be a Haskell without a Baffert runner. The silver-haired conditioner has won this contest a stakes-record eight times from 14 entrants.

Never overlook Bob in the Haskell, even when he’s not firing his best shot. That would have been Game Winner, the Eclipse Award champion at 2 and the winner of the Los Alamitos Derby most recently.

The Grade 1 Haskell was never in the cards for Game Winner. Like Maximum Security, the 8-5 Haskell favorite, Game Winner is owned by Gary & Mary West. Maximum Security, best known as the horse disqualified from victory in the Kentucky Derby, is based at Monmouth with trainer Jason Servis.

It didn’t make sense for the two talented colts from the same ownership to knock heads when a divide-and-conquer strategy was available.

“If they didn’t have Maximum Security, Game Winner would have probably been there,” Baffert said of the Haskell. “Game Winner, the main goal is the Travers. I think a mile-and-a-quarter is going to be his game.” 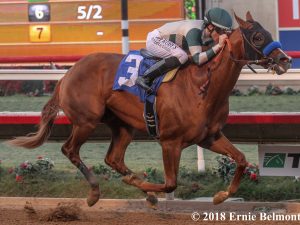 So Mucho Gusto, 5-1-1 in seven starts, gets his chance to take a swing with the big boys. He was a well-rated winner of the Affirmed Stakes (G3) at Santa Anita last month.

“We’re excited about it,” Baffert said. “He deserves a chance to take a shot at a Grade 1 like that. He couldn’t be doing any better.”

Baffert once again revealed his secret to Haskell success: having a prerace frankfurter from Max’s Hot Dogs, a Jersey Shore culinary legend.

With Baffert remaining in California, Barnes gets to enjoy the snack this year.

“That’s a ritual that we have,” Baffert said.