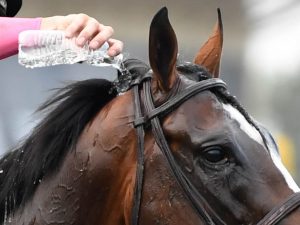 The heat is on horse racing in more ways than one.

With temperatures and heat indexes forecast to soar well over 100 degrees along the Northeast, into the Mid-Atlantic and Ohio Valley regions, virtually all thoroughbred tracks in the area have canceled Saturday racing, including Saratoga Race Course in upstate New York.

Delaware Park, Belterra Park in Ohio and Parx in Pennsylvania will all be dark at least on Saturday with the status of their Sunday programs yet to be decided.

The National Weather Service has forecasted temperatures to hover near 100 with heat indexes ranging from 105 degrees to 110 degrees. A heat index is predicted considering the effects air temperature, wind speed and humidity.

“Working in consultation with NYTHA and following the recommendation of Dr. Palmer, we are cancelling Saturday’s card in the best interests of the safety of our equine athletes and horsemen,” NYRA CEO & President Dave O’Rourke said. “Assessing the safety of racing conditions, including weather, racing surfaces and raceday scrutiny, is of the utmost importance to NYRA and our industry partners.”

Laurel Park in Maryland preemptively called off both of their Saturday and Sunday programs early Thursday.

“With the forecast calling for extreme temperatures and high humidity this weekend, we have decided to cancel our live programs both Saturday and Sunday,” Maryland Jockey Club President and General Manager Sal Sinatra said. “The health and safety of our horses and jockeys is are highest priority.”

Ellis Park was halted for Friday, but plans as of late Thursday indicated a decision hasn’t been made yet for Saturday and Sunday.

“The forecast is heat index looking up to upwards of 110 degrees,” Ellis Park racing secretary Dan Bork said“Consulting with our state veterinarians and other officials, we just thought it would be in the best interests of everybody to not go ahead and run (Friday). Then we’ll look ahead to Saturday and go on a day-by-day type of thing. It’s just safer for everybody — for horses, for jockeys, for the fans. It’s going to be an extreme day. Any time that number gets to 105 and above, we start taking a really close look.”

So far, though, the $1 million Haskell Invitational (GI) card at Monmouth Park in Oceanport, New Jersey, is still a go, with racing officials taking extra safety precautions considered, “standard protocol for extreme weather,” to keep horses, staff and an estimated crowd of between 35,000 and 40,000 people safe in anticipation of the overbearing temperatures.

Some of the measures include extra medical personnel, stationing ice containers throughout the track, extra hoses for horses to be cooled down before and after races and amisting system in the paddock. Additionally, post parades will likely be shortened to keep horses and jockeys out of the sun and if it gets too oppressive, delays in post times may be implemented.

“Our priority will be the safety of the horses, jockeys and our fans,” Dennis Drazin, Chairman and CEO of Darby Developments, the operators of Monmouth Park, said. “We will be in contact with the state veterinarians, and if we feel it’s unsafe for horses there are things we can do.”

All stakes races set to be contested over the canceled dates will be rescheduled, track officials said.