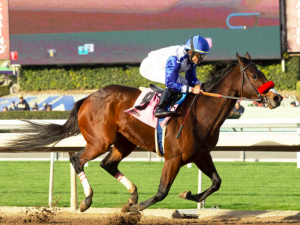 The road to the Kentucky Oaks (G1) continues this weekend, with five California-based fillies set to race a mile in the $200,000 Las Virgenes Stakes (G2) at Santa Anita Park on Saturday.

Venetian Harbor comes into the race off a 10 ¾-length maiden win on Dec. 29 for trainer Richard Baltas. The 3-year-old filly is the heavy 2-5 favorite and will be ridden by Flavien Prat.

The Las Virgenes is the fifth race on the card with a post time of 2:30 p.m. PT. The race offers Oaks qualifying points of 10-4-2-1 to the first four finishers.

Since first run in 1983, the race has drawn some of the best fillies in the West that wound up in the Oaks on May 1 at Churchill Downs and as champions. The Las Virgenes also serves as a prep for the Santa Anita Oaks (G1) in early April, and has drawn winning performances from the likes of Lite Light, Lakeway, Serena’s Song, Sharp Cat, Keeper Hill, Excellent Meeting, Surfside, Rags to Riches, Stardom Bound, Blind Luck, Beholder, Songbird, Unique Bella, and Bellafina a year ago. The race is named for a park preserve in Los Angeles county encompassing nearly 700 acres of the Santa Monica Mountains adjacent to the popular Malibu Creek State Park. The park has several hiking trails, the most significant being Las Virgenes View Trail through grasslands and oak woodlands near Las Virgenes Road in the far north San Fernando valley and then up a canyon to a ridge for a 360-degree view of the Santa Monicas.

Hall of Famers D. Wayne Lukas and Bob Baffert have each sent out five winners. Baffert trains two of the five fillies in Saturday’s race, Gingham and Stellar Sound.

Retired jockeys Corey Nakatani and Gary Stevens each rode four winners throughout their exceptional careers. One is in the Hall of Fame, the other is sure to make it in the future. The Las Virgenes field, with jockeys, trainers, odds and pedigree: