The Filly Does It! Swiss Skydiver Upsets Derby Winner Authentic in Preakness

It’s a filly, in the Preakness! In near record time!

After a thrilling stretch duel, the filly Swiss Skydiver held off Kentucky Derby winner Authentic by a neck in a historic $1 million Preakness Stakes (G1) – the final leg of the 2020 Triple Crown. 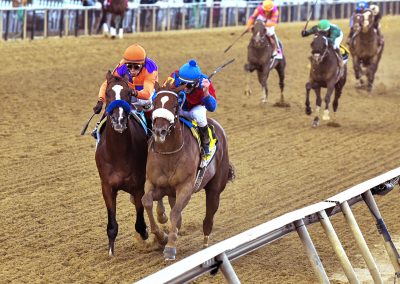 The sensational Swiss Skydiver, sent off at 11-1 in the field of 11 3-year-olds, was ridden by journeyman Robby Albarado, a late replacement who hasn’t been on the big racing stage for several years.

The key to victory came with a half-mile to go when Albarado, in what trainer Ken McPeek a ”genius move,” piloted the chestnut filly through an opening to the inside of Authentic to grab a narrow advantage that she never relinquished.

The two stars pulled away from the rest of the field, and the race to wire was on. Hall of Famer John Velazquez urged on 3-2 favorite Authentic with a left-handed whip, while Albarado and Swiss Skydiver held strong to pull out the victory.

Swiss Skydiver ($25.40) became the sixth filly to win the Preakness – the first since champion Rachel Alexandra won the classic in 2009.

Baffert comes up short of record

Hall of Fame trainer Bob Baffert was seeking a record eighth Preakness victory, and while his two colts – Authentic and Thousand Words — set the early pace, it was the filly purchased for $35,000 who raced patiently behind the leaders until making her winning move.

“I’m just really proud of Robby,’’ said McPeek, who won his first Preakness. “We had to call him into the game at the last minute. He did a great job. Really proud of her, him, owner Peter Callahan. It’s an honor to be around this horse. It’s a great moment.”

Even with no spectators at Pimlico Race Course due to the COVID-19 pandemic health and safety measures, the 145th edition of the Preakness was a doozy.

Swiss Skydiver had options other than Preakness 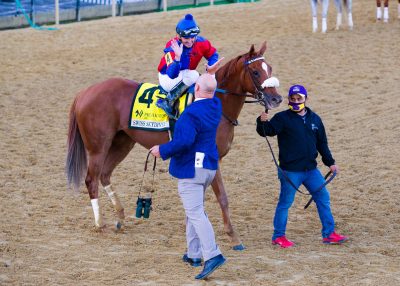 Before entering the race, McPeek had considered other options for Swiss Skydiver, who tested the boys in the Blue Grass (G2) and finished second to Art Collector (who was fourth in the Preakness). He was thinking of running the filly at Keeneland this weekend, but when Belmont Stakes (G1) winner Tiz the Law was declared out of the Preakness, it helped McPeek make up his mind.

Good call. After the Blue Grass, Swiss Skydiver regrouped and won the Alabama (G1) and ran second in the Kentucky Oaks (G1) on Sept. 4 – both against fillies. She was ready for the boys in Baltimore. Tyler Gaffalione was aboard the filly most recently, but committed to riding at Keeneland since McPeek waited until the last minute to decide on which race to enter. So he turned to the 47-year-old Albarado, who had ridden for McPeek in the past and also won the 2007 Preakness aboard Curlin.

“Robby and I had great week. We walked with her together, we had breakfast and lunch together,’’ said McPeek. “It’s a lifetime experience for both of us. And I hope we’ll be back.”

With the racing schedule reconfigured due to COVID-19, the Triple Crown was turned topsy turvy, with the Belmont the first leg rather than the last one, the Derby the second leg, and the Preakness the final leg. And, instead of a three-race in five weeks sprint, this version turned into a 15-week marathon – with three worthy winners – Tiz the Law in the Belmont on June 20, Authentic in the Derby on Sept. 5 and Swiss Skydiver in the Preakness on Saturday.

“We had a good start, no trouble at all. In the first turn we got by Art Collector. By the backstretch, I tried to open up, but he just stood there and Swiss Skydiver came to him,’’ said Velazquez. “I tried to get him rolling again, but he just stayed with that other horse from the half-mile pole to the wire.”

Highlights from the Preakness undercard:

Miss Marissa took the lead around the far turn and held off a furious finishing drive by 4-5 favorite Bonny South to win by a neck in the race before the Preakness.

Miss Marissa ($22.20), ridden by Daniel Centeno, extended her win streak to three in a row, but her best previous stakes finish was a third in the Ruthless Jan. 20 at Aqueduct.

After Miss Marissa took the lead, Bonny South, under Florent Geroux, started rolling from the back of the back and came flying down the stretch and came up short. Bonny Miss ran second to Swiss Skydiver in the Alabama (G1) at Saratoga, but got too far behind at the start to catch the winner in this one.

“The plan was to try to break sharp, get a good position and try to go easily from there,’’ said Centeno. “If someone tried to go to the lead we wanted to make sure that we were very close and make sure that she was really comfortable. She broke really sharp, I saw the inside horse go and I let her go. She sat off her practically all the way around. When I asked her she responded very well to the end.”

Wicked Whisper ($12.60) made a mid-stretch move between horses and won by a length over Ain’t No Elmers her first victory in nearly a year.

Ridden by Joe Bravo and trained by Steve Asmussen, Wicked Whisper covered the 6 furlongs in 1:10.36 over fast main track. Sound Machine was third.

Wicked Whisper came out of 2019 BC Juvenile Fillies (G1) with a minor leg issue. She was fourth in the Beaumont (G3) and second in the Charles Town Oaks on Aug. 28 in her 2020 races before her win in the Miss Preakness.

“She’s a Grade 1 winner in last year’s Frizette. She’s been definitely interrupted by this year’s racing calendar,’’ Asmussen said. “She was getting ready late for things and then with the cancellations, we got off track. It’s beautiful to see her show the quality that she’s always had. Joe gave her a great trip today. There are big things in her future.”

Factor This ($3.60) and jockey Florent Geroux considered all their options early on and simply cruised to a 2 ¾-length victory for trainer Brad Cox.

The 119th running of the Dinner Party gave the Cox-Geroux team a second graded stakes win on the card. Earlier, Juliet Foxtrot won the Gallorette (G3) on the turf.

Factor This, the 4-5- favorite in the field of seven, went to lead from the far outside post and then held off Somelikeithotbrown for the win. The 5-year-old now has five win in eight starters

“It was a big class relief for the horse,’’ said Geroux. “He just ran a great race in the Grade 1 [Churchill Downs’ Turf Classic] on Derby day. It was a great spot for him and a nice confidence builder for the horse.”

Laki ($16.40) won by a lucky nose after a three-horse photo finish to earn yet another stakes victory to his resume of at least one in each of the past four years.

The win was the first graded stakes success for trainer Damon Dilodovico, who also won this race with Immortal Eyes in 2013, when the race was ungraded.

“It was unbelievably exciting. Everyone was hollering like it was a full house, like a May Preakness. It means the world to me,’’ said Dilodovico.