Little Brown Jug day at the Delaware County (Ohio) Fair on Thursday will be crowded in several ways – 13 pacers are entered creating two elimination heats that lead to the final, and attendance that could reach 40,000.

The five-day Grand Circuit stop at this half-mile oval is considered one of the top weeks in harness racing. capped by one of pacing’s most popular races for 3-year-olds.

The female version of the Jug, which carries a purse of nearly $400,000, is the Jugette for 3-year-old fillies set for Wednesday.

In the Jug, the first four finishers from each heat qualify for the final. The first elim has a field of seven, with Lou’s Pearlman with 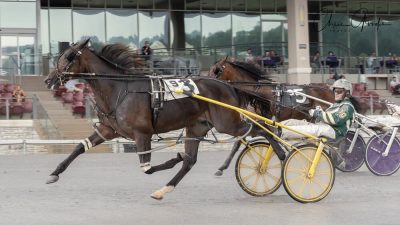 The Pennsylvania Sire Stakes champ is trained by Ron Burke and will be driven by Yannick Gingras – two of the best in the business.

He was second in four top events this year: the North America Cup, the Meadowlands Pace; the Max Hempt Memorial, and Cane Pace.

To me, he’s too good to finish second again. The field is good one for the Jug, but not as good as some of his runner-up finishes. That tells me that his class will show in the final, set for 6:30 p.m. ET.

In the final, I’ll go with Whichwaytothebeach second and Lou’s Pearlman third. It’s a bit tricky, of course, because each horse still must qualify but these three are the class of the field.

Attendance was limited in 2020 due to the COVID-19 pandemic.

The Jugette drew 10 entries – two five-filly elims to pare down to a final eight. To me, this is Test of Faith’s race to lose. She has checked all the boxes: 18 starts, 16 wins and $914,050 in earnings. She’s coming off a big win in the $200,000 New York Sire Stakes championships at Yonkers, so she should have no issues with the half-mile for trainer Brett Pelling.