The Farrell Report: July 4 Festival Of Stakes Races On Tap At U.S. Tracks

The arrival of Independence Day this weekend is the signal we have moved into the heart of summer. There will be plenty of fireworks in the sky, and on the racetrack.

There are a trio of Grade 2 Breeders’ Cup “Win and You’re In” races on the immediate horizon with a pair on Saturday: the Suburban for the handicap division at Belmont Park and the Princess Rooney Invitational for filly and mare sprinters at Gulfstream Park.

The John A. Nerud for sprinters at Belmont is the top attraction Sunday.

The warmer weather means a return to the usual stakes congestion. Churchill Downs just closed out its meet with the Stephen Foster (G2) and now the Suburban follows right behind.

Turf writers and observers have spilled an ocean of ink, and a universe of data bytes, bemoaning the industry’s failure to coordinate its stakes calendar to prevent overlaps. It’s nothing new … and no resolution is at hand. So, we soldier on. 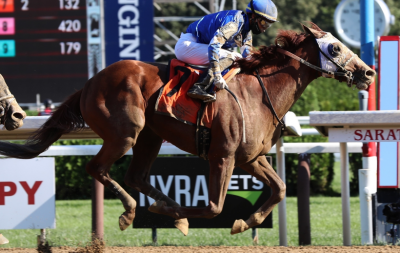 We are all eager to catch our first glimpse of Mystic Guide since he conquered the racing world in the Dubai World Cup (G1) back in March.

The Suburban will be his first start back on the road to the Breeders’ Cup Classic (G1).

The overabundance of stakes races we referenced allowed Godolphin to divide and conquer with their talented homebreds. They dispatched Maxfield to the Stephen Foster (which he won with ease) while keeping Mystic Guide in reserve for the Suburban.

Mystic Guide has been preparing at the Fair Hill training center in Maryland with trainer Michael Stidham who reports the colt “is doing fantastic. We’ve given him plenty of time and he’s had three months since that race (Dubai World Cup) to bounce back. Looking at him train, and his weight and his coat, he’s an absolute picture right now.”

Sounds like he’s polished up to pose in the winner’s circle on Saturday.

Summit of Speed at Gulfstream

It’s Summit of Speed Saturday in South Florida and the Princess Rooney is the headline event at 7 furlongs for BC Filly & Mare Sprint (G1) hopefuls.

Ce Ce is the most prominent name on the invitation list as she tries to recapture the magic of the Spring of 2020 when she scored consecutive Grade 1 wins in the Beholder Mile at Santa Anita and the Apple Blossom at Oaklawn Park.

The 5-year-old trained by Michael McCarthy is 1-for-6 since then with the lone victory coming in a Santa Anita allowance race.

Trainer Brad Cox, who seems to be winning everywhere all the time, has Mundaye Call and Vault on track for the Princess Rooney.

Back to Belmont for the Nerud

The trio of Breeders’ Cup qualifiers next weekend concludes Sunday with the Nerud, where Firenze Fire squares off again with American Power with a slot in the BC Sprint (G1) hanging in the balance.

Firenze Fire got the best of their showdown in the True North (G2) earlier this month, winning by 1 1/2 lengths while American Power was third.

Other Nerud probables include Doubly Blessed, Mind Control, Three Technique and Wind of Change, fresh from a pacesetting win over a sloppy track in the Mr Prospector Stakes at Monmouth Park. 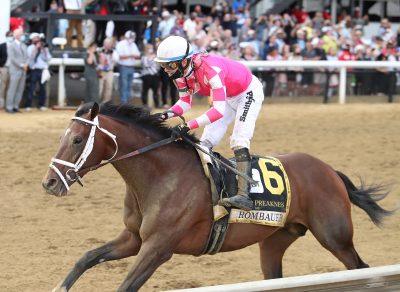 Rombauer #6 with Flavien Prat won the $1,000,000 Grade I Preakness Stakes at Pimlico Racecourse on Saturday May 15, 2021. Photo Courtesy of Bill Denver/MJC

While the three Breeders’ Cup qualifiers carry the most weight, there is plenty of stakes action in every corner starting Friday with the Iowa Derby, the Cornhusker (G3) and the Iowa Oaks (G3) at Prairie Meadows.

On Saturday, Delaware Park chips in with a pair of 3-year-old stakes: the Delaware Oaks (G3) for fillies and the Kent (G3) on the turf. The 3-year-olds are also featured on the opposite coast in the Los Alamitos Derby (G3).

Pimlico stages a pair of $100,000 stakes on Sunday: the Caesar’s Wish and the Concern while Belmont closes out the holiday weekend Monday with the 1-mile Dwyer (G3) for 3-year-olds.

It’s one of the busiest stakes weekends of the year. So fire up the grill and enjoy… and don’t forget to toss that firecracker after you light the fuse!