Last year, the Messenger Stakes and the Yonkers Trot were canceled due to the COVID-19 pandemic. The races are back this year at Yonkers Raceway but moved from their usual Labor Day weekend spots to Friday (July 2) as the first legs of the Triple Crown for 3-year-old pacers and trotters.

Last week, eliminations were held for both gaits. Thirteen trotters were entered in the Yonkers Trot with a top four finish needed to secure a spot in the $500,000 final. 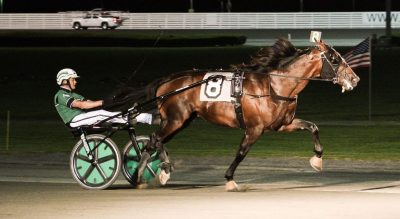 In the first elim, driver Andrew McCarthy and Ahundreddollarbill made short work of the field to win in 1:54.2. The son of Chapter Seven took the lead right after the quarter-mile mark to win going away. Securing spots in the final were Mon Amour, Ethan T Hanover and On A Streak.

The two separated themselves from the rest of the pack with Johan Palerma nipping Ambassador Hanover at the wire in 1:54 flat. These two will likely be the betting favorites.

The third and fourth place finishers were In Range and Arnold N Dicky.

The Trotting Triple Crown consists of the Yonkers Trot, the Hambletonian (Aug. 7) at The Meadowlands and the Kentucky Futurity at The Red Mile (Oct. 10). The last to win all three was Marion Marauder in 2016.

Fifteen horses were vying to make the Messenger Stakes final, the first leg of the Pacing Triple Crown. The two elim winners established themselves as the clear favorites for Friday’s final.

The only New York bred in the field, American Courage, went to the front in the first elim and won comfortably in an eye-popping 1:50.4. Breaking 1:50 is very hard to do at Old Hilltop, but if American Courage is pressed — he wasn’t in this race — we might just see a sub 1:50 this Friday.

The second final saw an odd beginning with 1-9 favorite Abuckabett Hanover. He did not break alertly and veered out to the five path in the early going. He righted himself shortly after the quarter pole but sat fourth at the half-mile. At the 7/8 pole he finally got into gear to pull away from I’ll Drink To That in 1:51.3.

The Pacing Triple Crown consists of the Messenger, the Cane Pace (Aug. 7 at The Meadowlands) and the Little Brown Jug (Sept. 23 at the Delaware, Ohio County Fair).

The fields for both races, with trainers.

On A Streak // Luc Blais

I’ll Drink To That // Chris Ryder

In addition, there are two $150,000 races for 3-year-old fillies. The New York New York Mile will feature the trotters and Mazzarati is the morning-line favorite. The daughter of Cantab Hall wired the field in the lone elimination race for driver Tim Tetrick and trainer Lucas Wallin in 1:55.2.

Read this: It’s A Bird, It’s A Plane, It’s Superman At The Track