Mention the Bluegrass State to a sports fan, and he or she will usually,think of great college basketball and thoroughbred racing. It could be time to include harness racing. 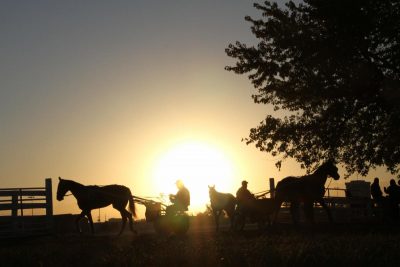 The Red Mile has long called Lexington its old Kentucky home, and in 2019, it was joined by Churchill Downs Incorporated’s Oak Grove, which will host its third standardbred meet this fall.

Yet another harness track is currently under construction in the southeastern part of Kentucky, and while that’s taking place, The Red Mile was granted its racing dates beginning on Independence Day, featuring 12 days of live racing through July 27.

The new track is being built in partnership with Keeneland and is owned by Kentucky Racing Acquisition (Ron Winchell and Marc Falcone), which owns Kentucky Downs.

It seems there is room for both styles of racing to flourish in Kentucky.

“We didn’t want to sit out a year waiting for the track to be completed at Corbin,” Winchell said, “I can’t say enough about The Red Mile working with us and granting us the dates until we can be up and running at Corbin.”

As soon as word got out that Kentucky was hosting another harness meet, Red Mile racing secretary Kevin Mack was overwhelmed with inquiries and is scrambling to find stables for owners and trainers.” I couldn’t be more pleased with the response,” Mack said, “right now we have more horses than stalls, but we’re delighted with the response and we’re looking forward to getting things going on July 4.”

In addition to regular races, the Corbin meet will feature prep races for the Kentucky Sire Stakes and the Commonwealth Series and will also host the Mercer County Fair program on July 13 with those finals slated for July 20.

“When you think about it, a few years ago, things weren’t looking great for harness racing in Kentucky,” Mack said. “We only had the Red Mile, but two years ago, Oak Grove opened and now we have Corbin. This helps the standardbred industry in our state. It’s giving Kentucky sired-horses better money to go for and it’s going to provide more days of racing, which was desperately needed.”

With three harness racing tracks in Kentucky, the hope is that the same thing can happen; that more foals will be born in Kentucky and will compete for richer sire stakes purses at all three tracks. Harness racing may never be as famous as its thoroughbred counterpart but it is making some inroads. From one track to three in just four years, things are looking better for pacers and trotters in My Old Kentucky Home.