The Farrell Report: Breeders’ Cup Must Do Better for Bettors

The Breeders’ Cup turned the Juvenile Turf (G1) into the proverbial “dog’s breakfast” with the clumsy handling of the scratch of Modern Games.

There has already been a mountain of coverage detailing the events that left the colt scratched from the parimutuel pool yet eligible to run for purse money only. We’ll skip the rehash of the unfortunate play-by-play and move on to the core issue:

What can and should be done to protect the bettors whose interests are rarely considered?

As network analyst Eddie Olczyk pointed out, the bettors were the big losers, especially those with multi-leg wagers like the Pick 6. Handicapping horses is never easy. It’s a fascinating, occasionally rewarding, challenge. It becomes mission impossible when the authorities make decisions that pluck the cash right from your pocket and then sheepishly say: “Our bad — too bad. Come back tomorrow and we’ll try to do better.”

It’s a sad and sorry spectacle when a horse wins a championship race to a cascade of boos from the grandstand. I’m sure many of those disgruntled players left Del Mar feeling they got a fairer shake at the Three-card Monte game on the neighborhood street corner.

Horseplayers are a hearty and determined breed, long accustomed to being fleeced by exorbitant take-outs on wagers, high admission and parking fees along with overpriced and underwhelming food options.

All they ask is a chance to grab that elusive brass ring. What they got was cruel and unusual punishment.

What’s done is done … and can’t be undone. The Breeders’ Cup, and the entire sport, has an obligation to see that it never happens again. 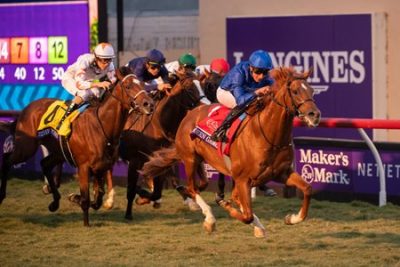 Granted this was an extraordinary circumstance, where a healthy horse is scratched and subsequently reinstated and wins the race.

Let’s look at some options for the future to avoid a future repeat.

For starters, the Breeders’ Cup has already taken steps to clean up and clear up communications between the on-track veterinarians and the stewards. This was a case of too many cooks in the kitchen. In recent years, the Breeders’ Cup responded to the horrific rash of breakdowns, especially at California tracks, by beefing up the monitoring and examinations of Cup horses. We always back horse safety 100%. This was a case of taking it too far, of one vet making a call to the stewards without properly consulting with colleagues.

But once Modern Games was scratched, what were the options once it was determined he was fit and ready to run?

The most obvious answer, and the fairest to the bettors, would be to leave him scratched. Once they wipe your number off the tote board, you’re out. Excluded. Done for the day. Thanks for coming.

That wasn’t going to happen. Keep in mind this is the BREEDERS’ CUP. It’s not the Fan’s Cup, or the Horseplayer’s Cup. Above and beyond all other considerations, it’s a showcase for the breeders. And those breeders sell a lot of fancy-pedigreed horses for huge money to Godolphin Stable, the owner of Modern Games.

They were never going to bite the hand that so richly feeds them.

The ultimate decision, to let Modern Games run for purse money only, undoubtedly pleased Godolphin but it screwed the bettors, especially the multi-race bettors. It’s a bitter pill to swallow when the horse you correctly selected to capture the final leg wins the race and you wind up with nothing but losing tickets.

What were the better options? Given the pre-race chaos, the entire race could have been declared a purse-money only contest with all wagers refunded. That would have been a huge financial hit to the Breeders’ Cup, but then you should pay for your mistakes. Don’t pass the burden onto the bettors.

Here is an even more radical thought. Given the rampant confusion and lengthy delay before the Juvenile Turf, why not cancel the card after the Juvenile (G1) and declare an “all” consolation payoff for the live multi-race ticket holders. Run the Juvenile Turf on Saturday, either before the already carded races, or after the Classic (G1), with full wagering.

That would not have been possible in the Lasix era. Horses medicated for race day can’t be safely re-medicated the following day. Now that we are allegedly in the era of a completely drug-free Breeders’ Cup, there is no reason the race could not be postponed one day.  That would allow for extensive and proper veterinary inspection of every horse caught up in the Juvenile Turf chaos.

Safer for the horses. Better for the bettors. Shouldn’t that be the goal?